(The CDF player from Wolfram.com is still at v. 10.4.1, so still exhibits the bug I discovered related to clipping planes/slicing of 3D models).

I also put the default comet path metadata for “CometC2007K5Lovejoy” in the Recombination (Solar System) epoch of the NBody pane.

This version has a more extensive 2D/3D fractal collection as well, enjoy!

If anyone is interested, I also have versions deployed on the Wolfram Cloud, so you can interact via your Android or iPhone. If you’re interested in these or full source code for working with SuperLie and LieArt packages – just ask.

BTW – I try to do reasonable regression testing on all these versions, but if you are using my stuff (and/or find a bug), please give me a shout at: JGMoxness@TheoryOfEverything.org

I’ve added some new features to my VisibLie_E8 ToE Demonstration. Some of it comes from Richard Hennigan’s Rotating The Hopf Fibration and Enrique Zeleny’s A Collection Of Chaotic Attractors . These are excellent demonstrations that I’ve now included with the features of my integrated ToE demonstration, since they are not only great visualizations, but relate to the high-dimensional physics of E8, octonions and their projections. This gives the opportunity to change the background and color schemes, as well as output 3D models or stereoscopic L/R and red-cyan anaglyph images. 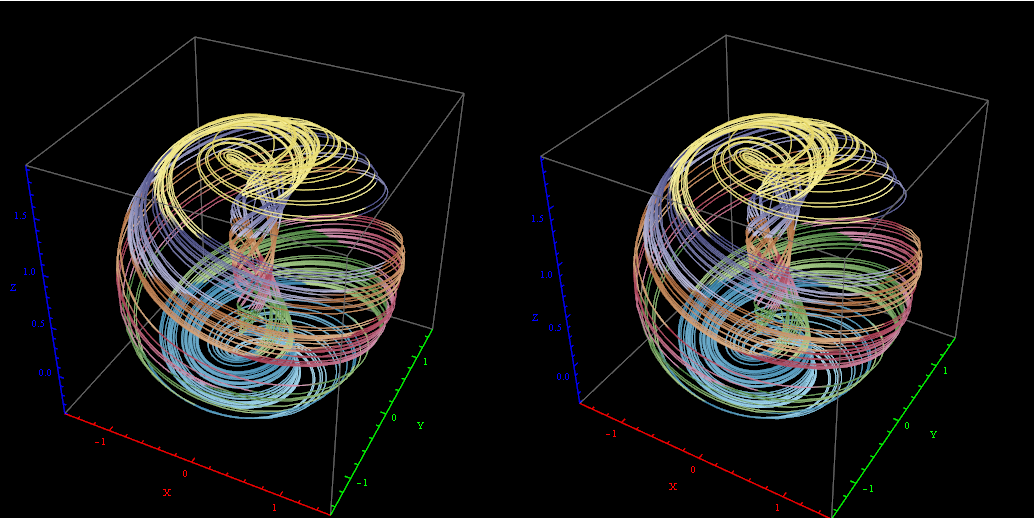 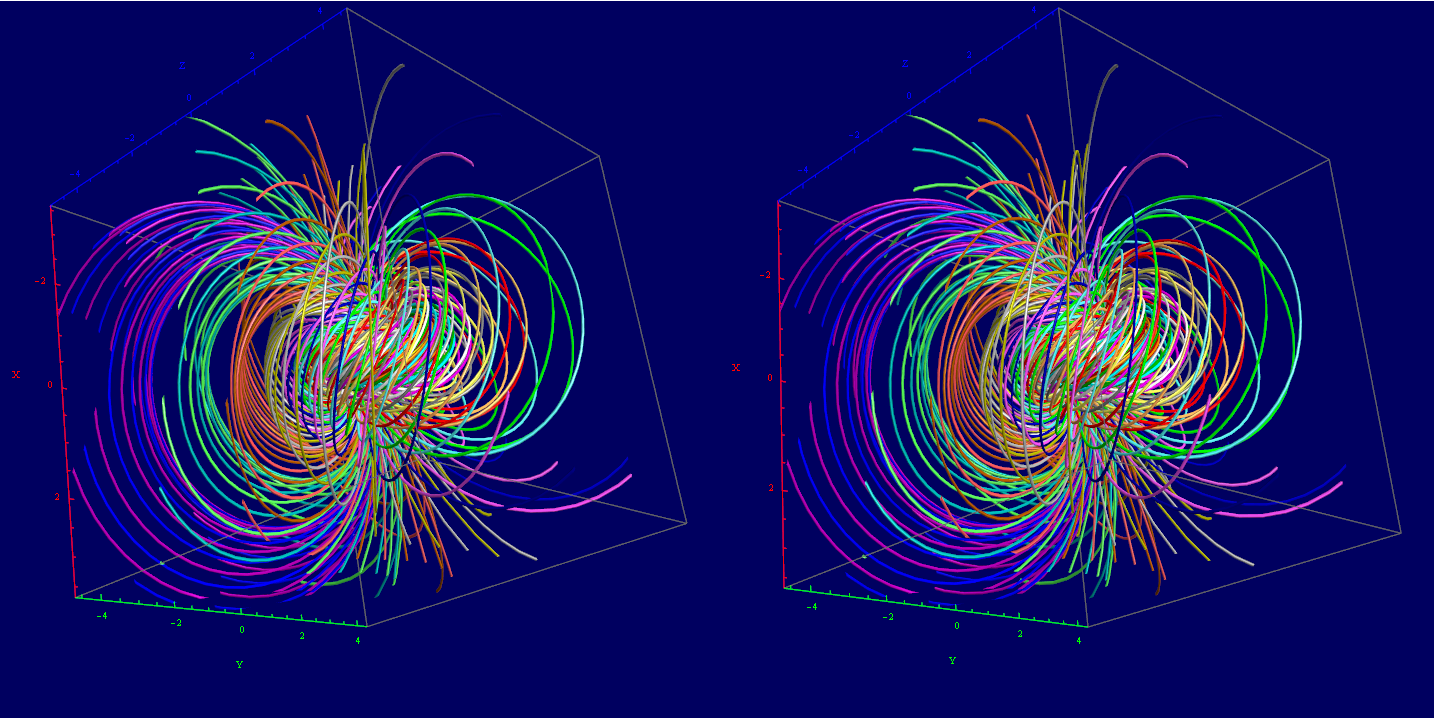 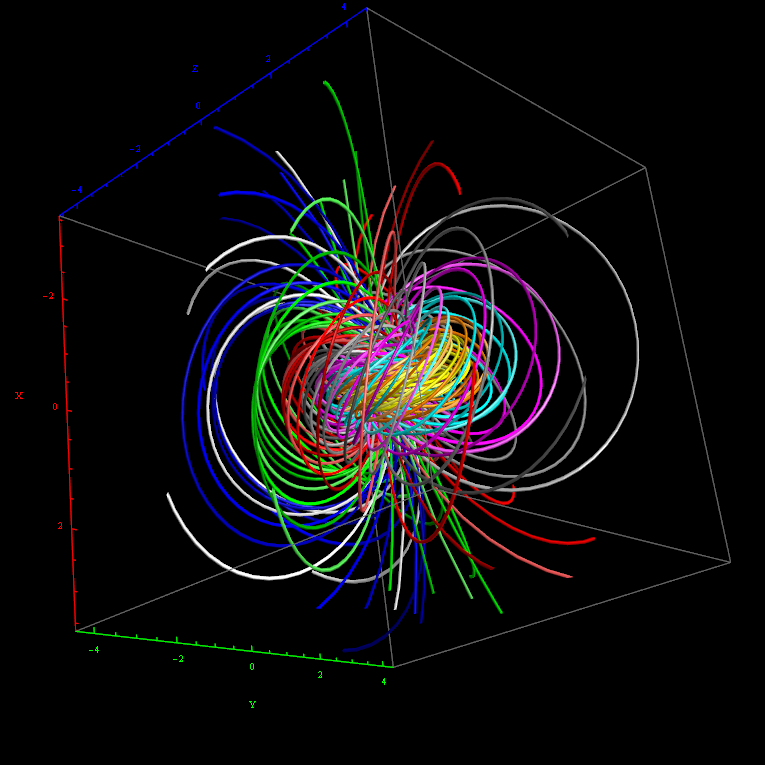 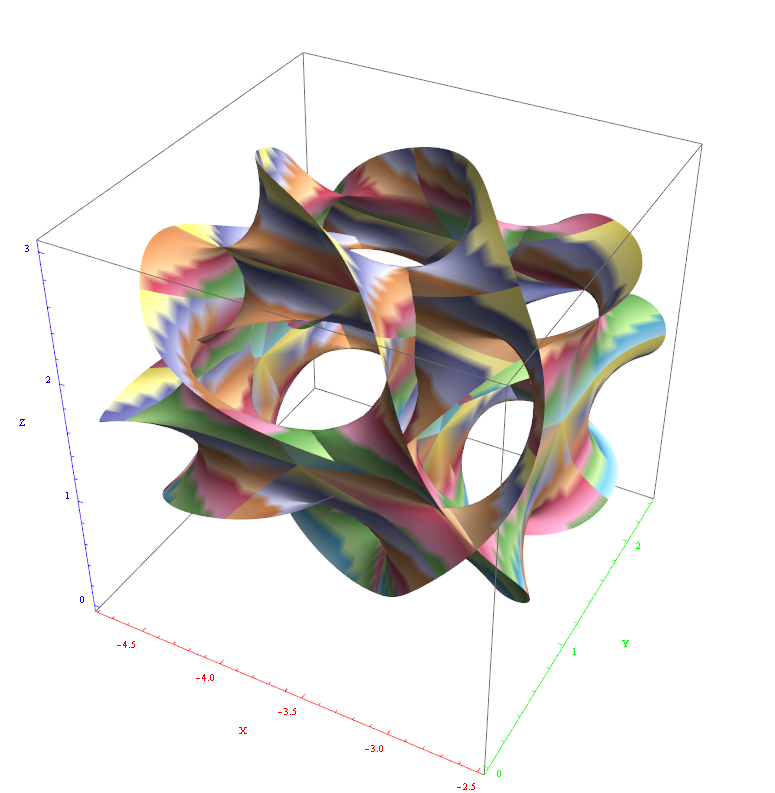 I’ve also used David Madore’s help to calculate the symbolic value of the E7 18-gon and 20-gon symmetries of E8. It uses the nth roots of unity (18 and 20, in this case) and applies a recursive dot product matrix based on the Weyl group centralizer elements of a given conjugacy class of E8. I ended up using a combination of Mathematica Group Theory built-in functions, SuperLie and also LieART packages. These symbolic projection values are: 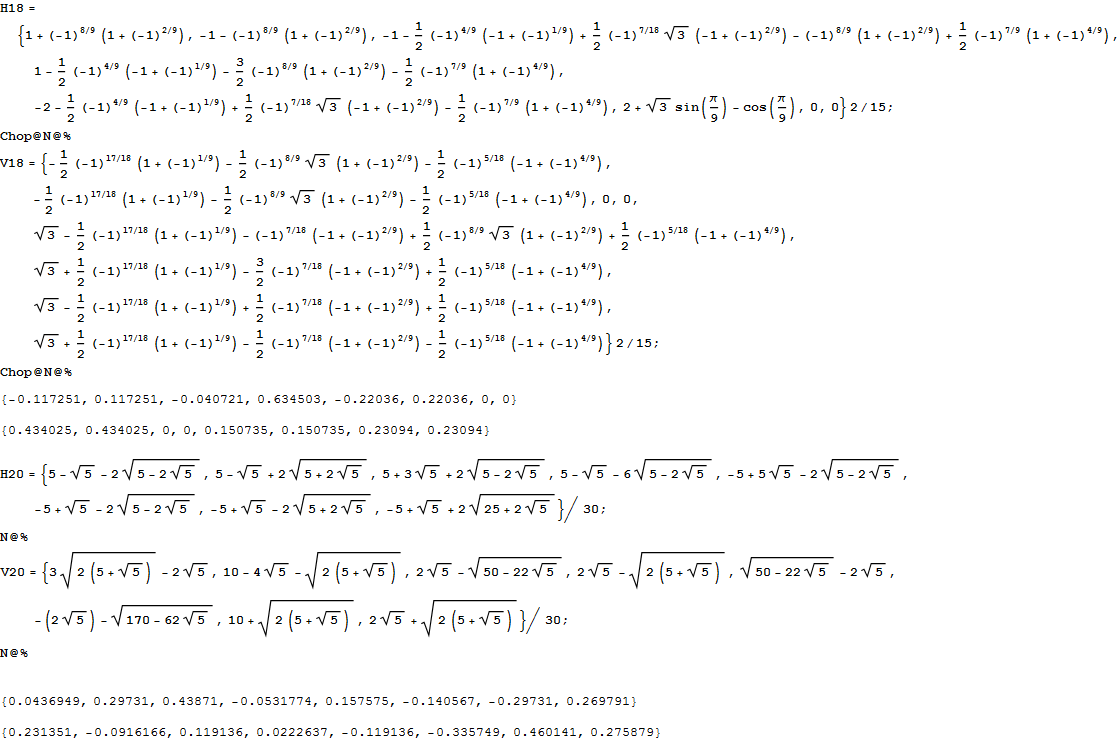 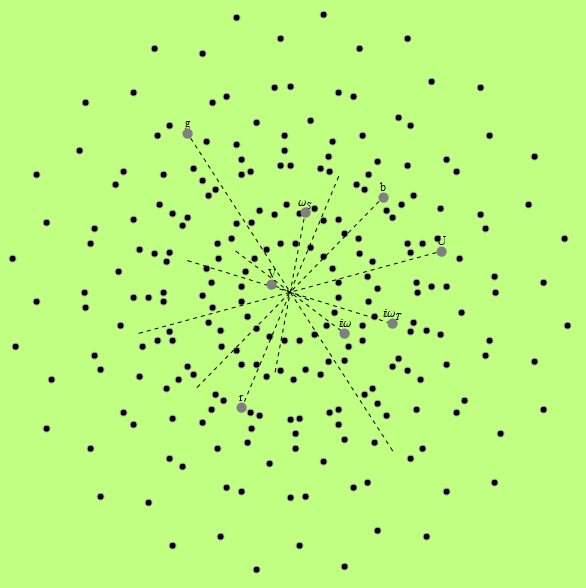 This weekend I integrated a fantastic demonstration by Zeleny which allows the visualization of the composite Quark particle decays. I’ve integrated it into the sixth (Hadron) pane which starts with Blinder’s demonstration to visualize the composite Quark-Gluon particles. These demonstrations are extended by allowing the selection of 2 Quark Mesons, 3 Quark Baryons and recently discovered 4 and 6 Quark Hadrons and also drives content of the E8 sub group projection pane (#3). I also added a query to show all experimentally discovered composite Meson/Baryon particles with the same quark content and added a decay mode button when decays are in Wolfram’s ParticleData Group curated data set. 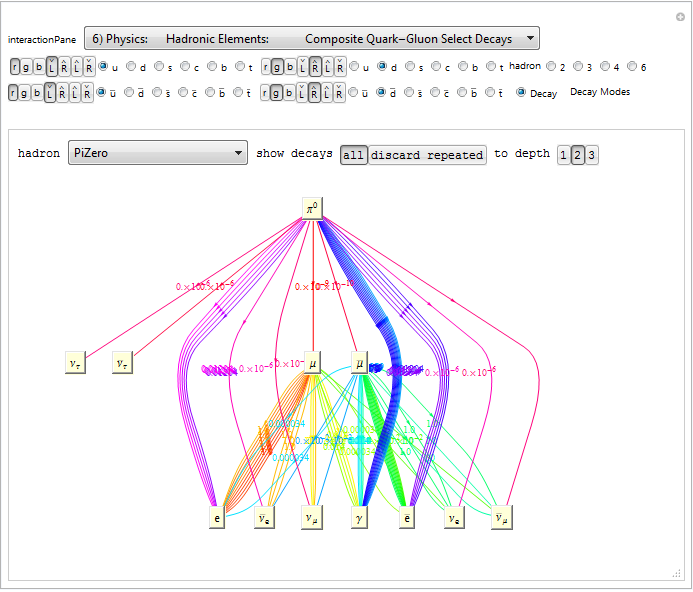 I’ve consolidated the Meson/Baryon panes into a single Hadron pane that now includes the formation of the recently validated TetraQuark Hadrons.

Please see ToE_Demonstration.cdf or as an interactive web page) that takes you on an integrated visual journey from the abstract elements of hyper-dimensional geometry, algebra, particle and nuclear physics, and on to the atomic elements of chemistry. It requires the free Mathematica CDF plugin (25 Mb). ToE_Demonstration.nb is the same as CDF except it includes file I/O capability not available in the free CDF player. This requires a full Mathematica license (25 Mb). 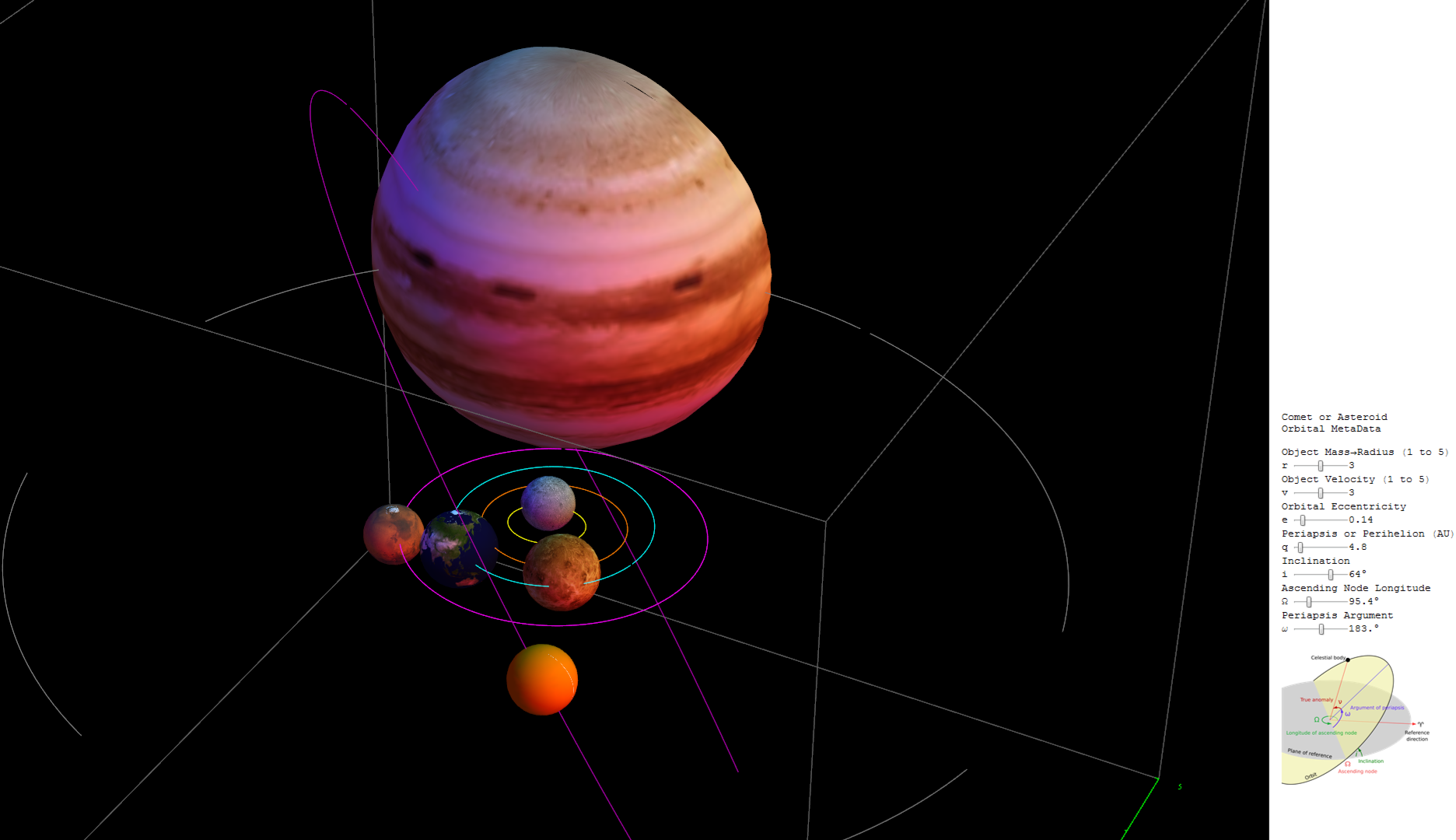 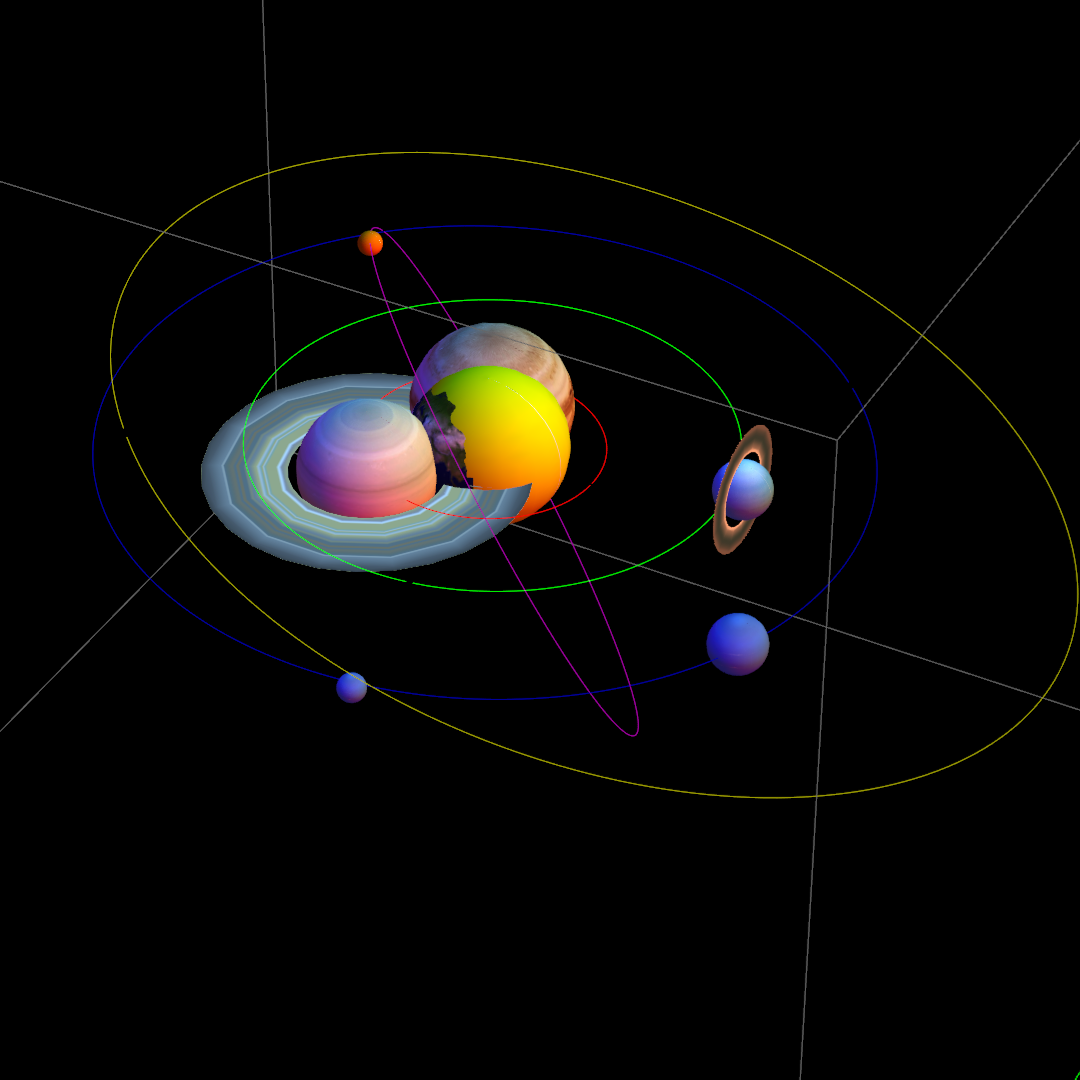 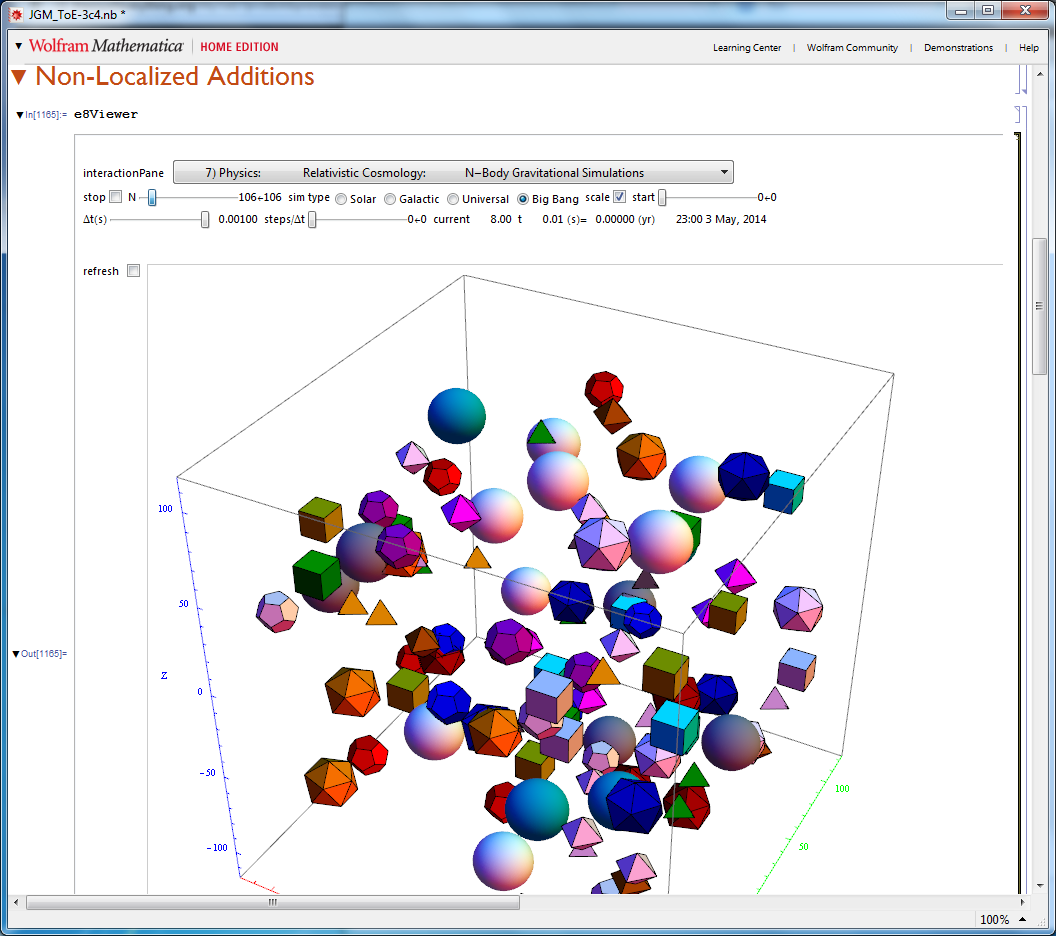 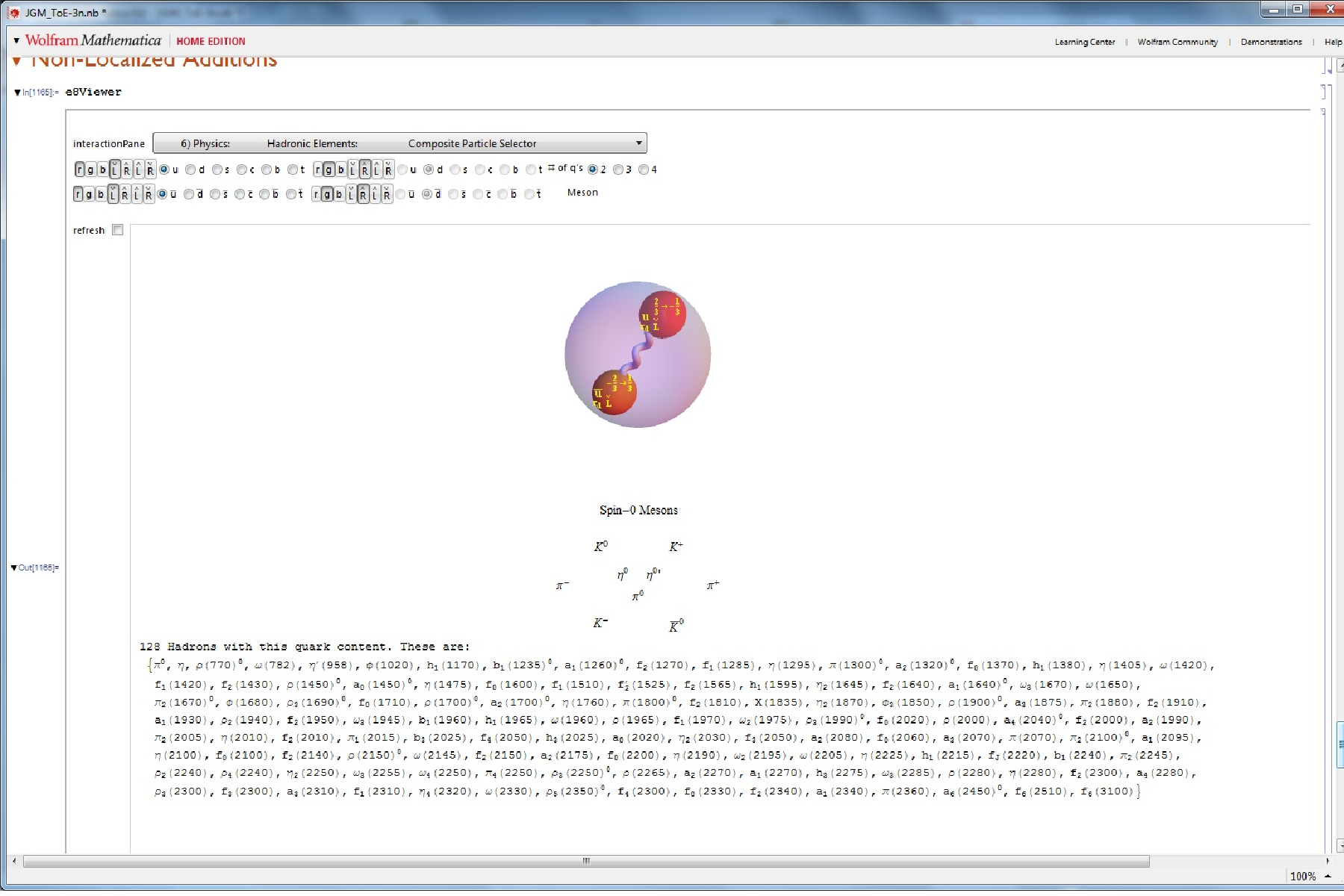 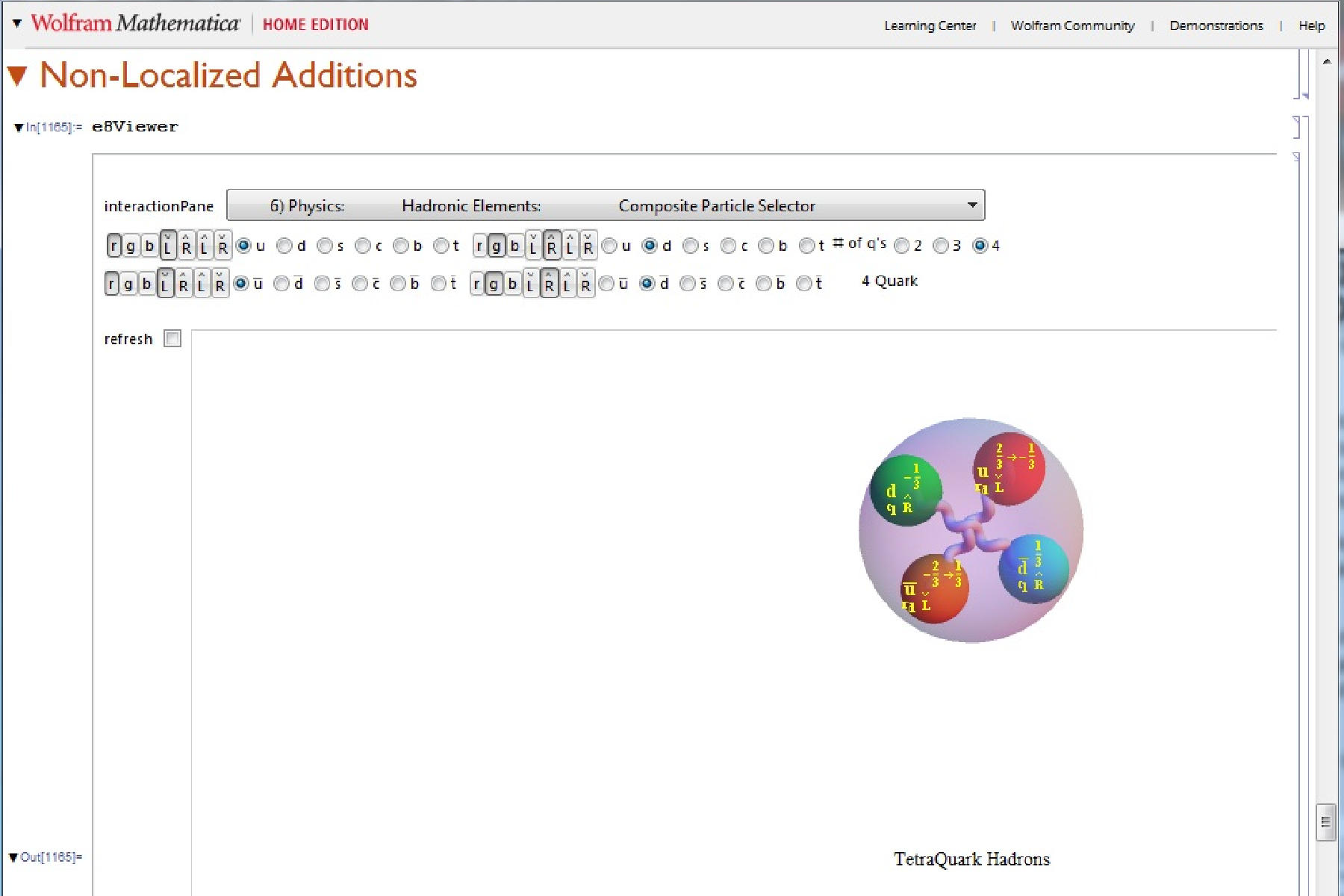 I’ve improved on a great Wolfram demonstration from Balázs Meszéna on Neutrino Oscillations by adding capabilities to view both the PMNS and CKM unitary triangle matrices, print and reference my ToE Neutrino mass predictions, which now accomodate the Koide relationships in particle masses.

This new pane (#5) presents the Unitarity of CP=T violations by combining the Lepton (Neutrino) Pontecorvo-Maki-Nakagawa-Sakata matrix (PMNS) with the Quark Cabibbo-Kobayashi-Maskawa (CKM) mixing matrix calculations through the Quark-Lepton Complementarity (QLC).

I am also working to incorporate the Koide particle mass relations to MyToE predictions. 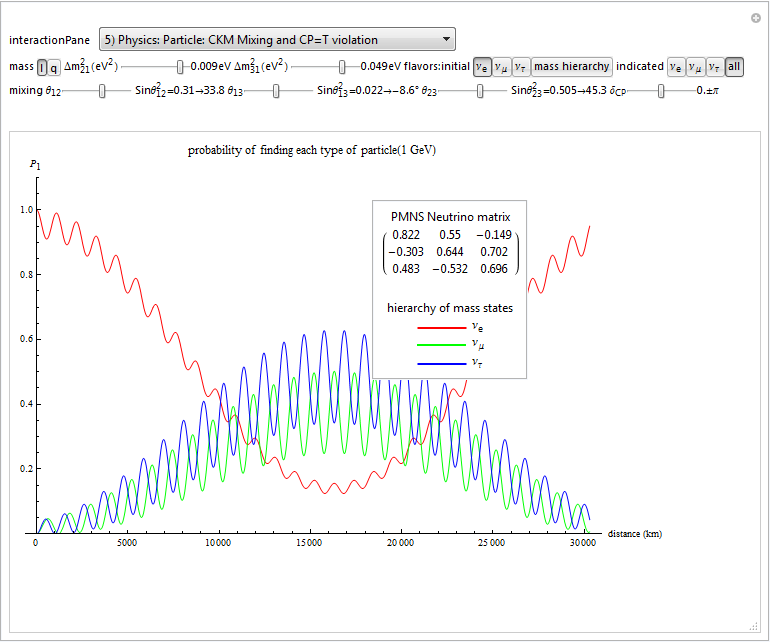 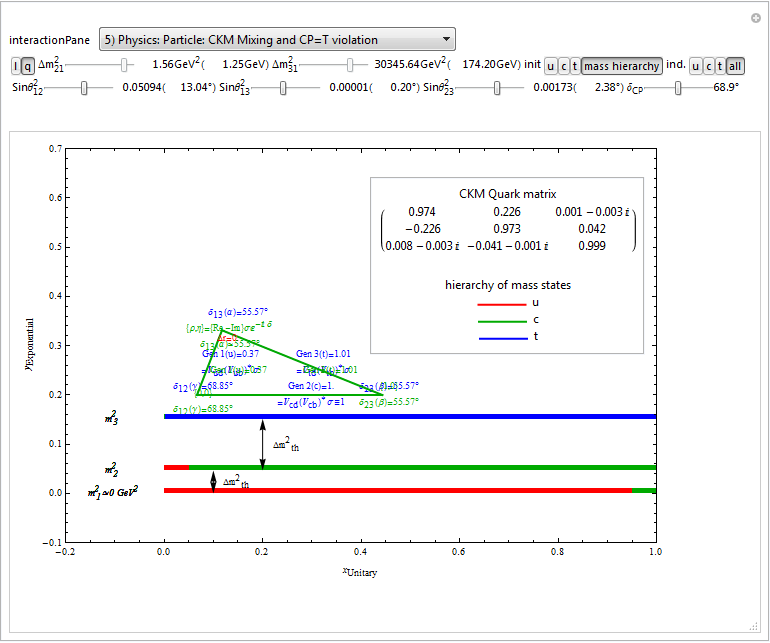 Code snippets showing the CKM and PMNS matrix calculations based on the UI. 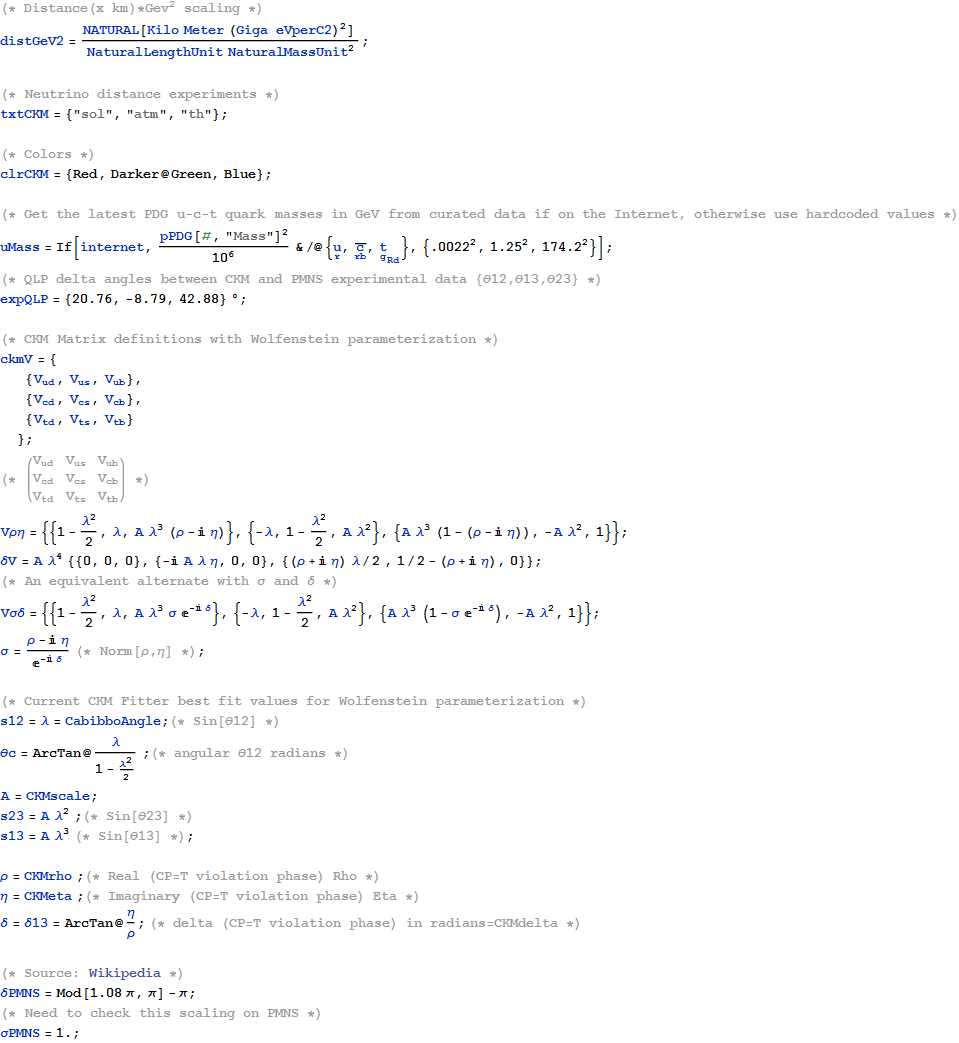 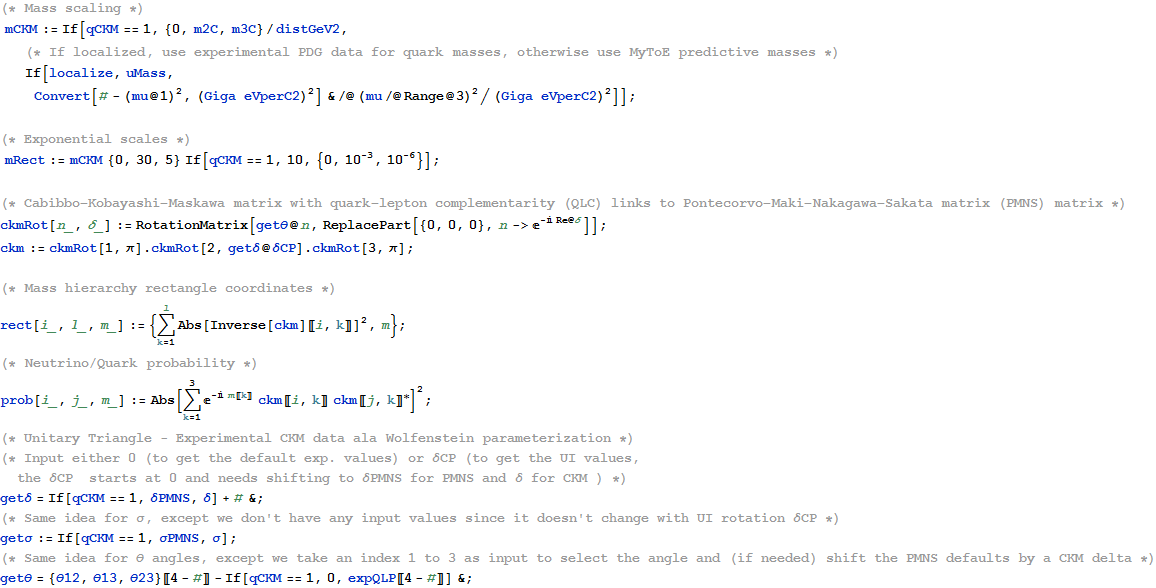 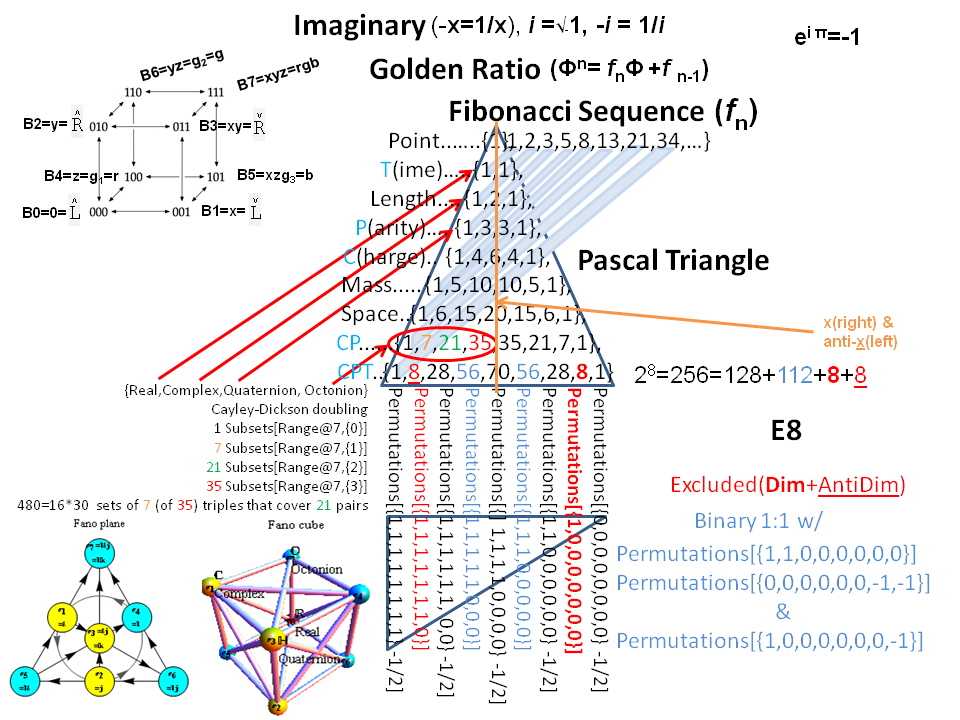 Assigning a specific mass, length, time, and charge metrics based on new dimensional relationships and the Planck constant (which defines Higgs mass).

The split real even E8 group used has been determined from this simple root matrix (which gives the Cartan matrix upon dot product with a transpose of itself):

This Dynkin diagram builds the Cartan matrix and determines the root/weight/height with corresponding Hasse diagrams. 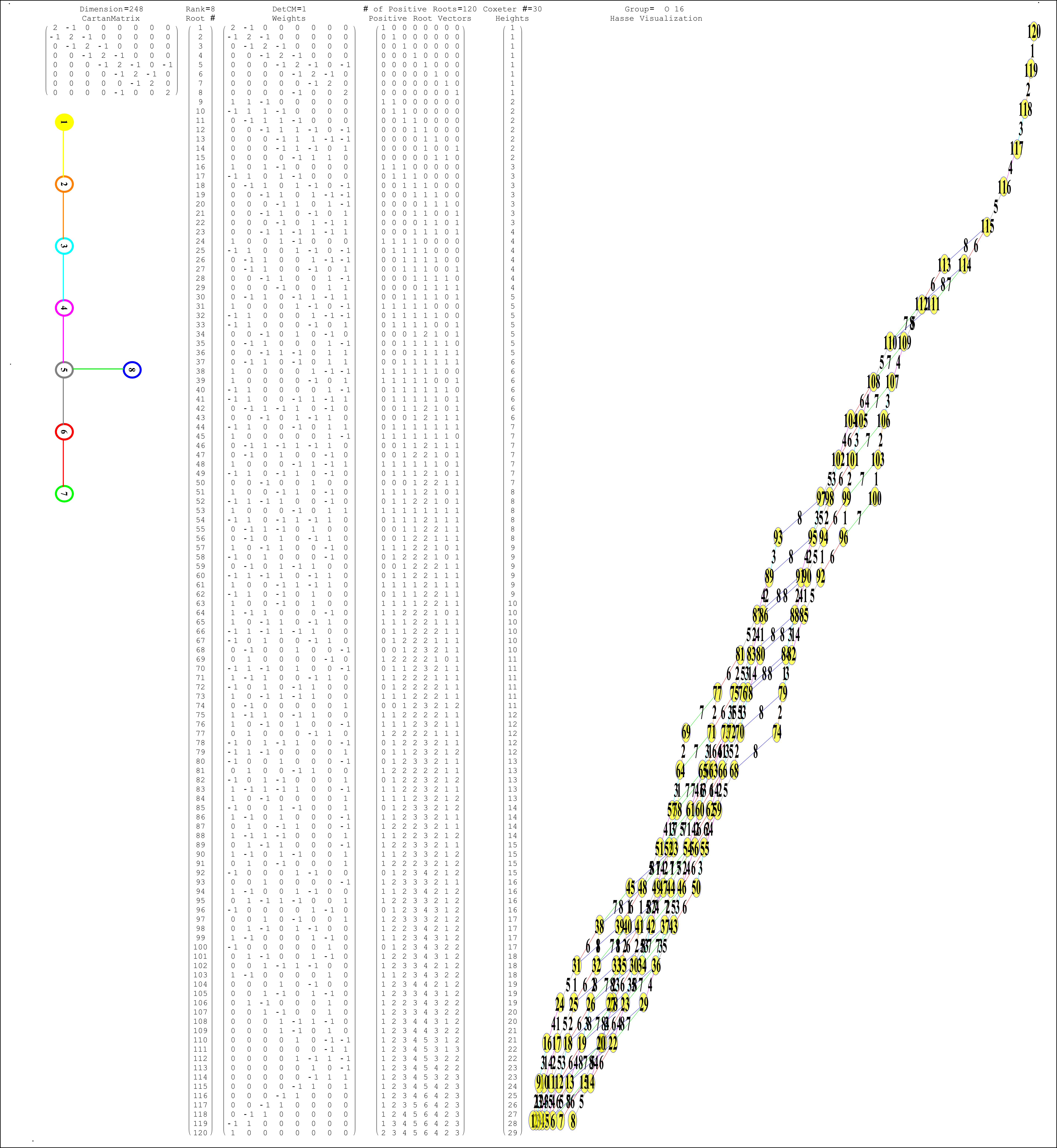 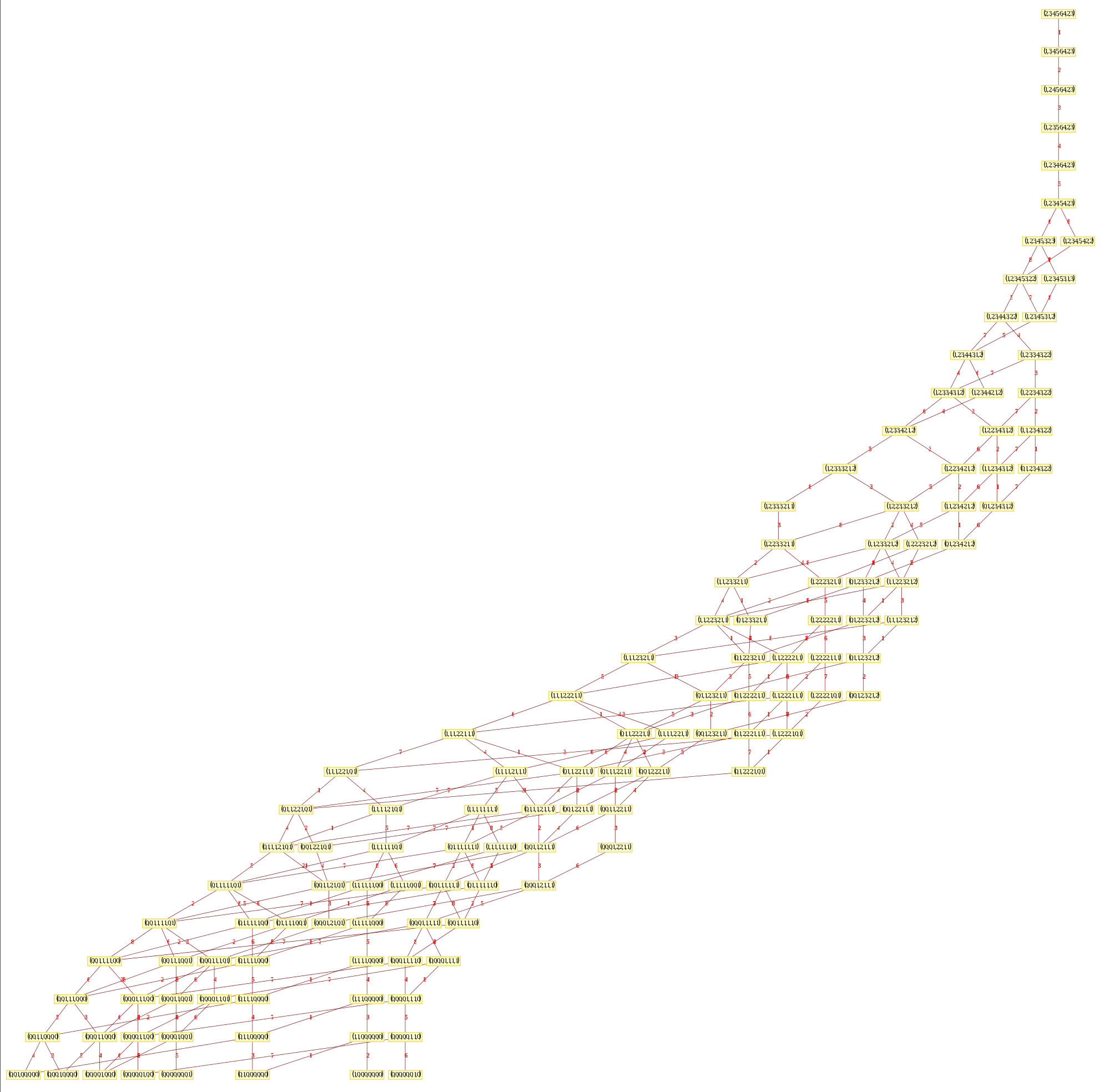 I’ve updated the .NB, .CDF and interactive demonstrations to include the ability to visualize the split octonions.

Please see a comprehensive page with the latest ToE visualization demonstration and full explanation of all of its aspects and control parameters!

The 2:1 cover of the 480 octonion permutations over the 240 vertices in E8 provides for a potential approach to resolve the issue of fitting the Standard Model (SM) into the beautifully symmetric structure of E8. This post (to be followed by a paper) describes the basics of that approach. For reference, see this Mathematica visualization demonstration tool for what follows (http://theoryofeverything.org/TOE/JGM/ToE_Demonstration.cdf).

But first, a bit about E8 and particle assignments:
Each vertex in E8 has been mapped (by AG Lisi with minor modifications in assignment) to a fundamental particle in an extended SM. This mapping is controlled in the above referenced demonstration by 8 bitwise quantum parameters which index the 256=240+16 “excluded” particles.
These 8 bits are:
(a)nti – which inverts the binary and negates the E8 vertex and gives the anti-particle of each particle
(p)Type – which differentiates the Neutrinos from electrons (and up quarks from down quarks, etc.)
2 (s)pin – up/down (or x-y or pitch rotation) and left-right (or y-z or roll rotation) spin
2 (c)olor – white (no color) and red-green-blue (e.g. the quark colors)
2 (g)eneration – 0 (no generation for bosons) and 1,2,3 for fermions

A bit about octonions:
The 480 octonion permutations are generated with a list of 30 sets of triples (3 numbers from 1-7 with no two triples with two numbers in common). These can be visualized as a Fano plane. The Fano plane is easily constructed by taking the first 3 (of 7) triads and deleting the 4th and 7th (of the 9) numbers. This gives a “flattened” list of numbers (1-7) in some permutation order. While there are 7!=5040 possible, only 480 create proper octonions. But how to pair up the 480 to mesh with E8?

There are 16 possible +/- sign reversal (or sign mask (sm) bits also shown as hex number) permutations available in each of the 30 Fano planes (30*16=480). These sm bits also “invert” like the “anti” bits in E8 (which sorts it into a top half/bottom half canonical list built using the 9th row of the Pascal triangle and Clifford algebras). So the 16 sm possibilities split into two sets of 8. This changes the direction of the Fano plane arrows. It turns out with some skillfull pattern matching in constructing the sign masks, the 8 sm bits pair up into two sets of four {1,4,6,7} and {2,3,5,8} giving a kind of “spin” match to E8. These pairs of 4 also operate as a left-right symmetry pattern seen in the structure of E8.

So far so good with 3 bits clearly paired between octonions and E8. The E8 excluded vertices (assigned 0 color and 0 generation bits – bosons) should also be excluded in the octonions. This would indicate the color and generation E8 bits would be indicated by those bits in octonions as well. But how? One hint is the generation 0 boson vs. fermion split of E8. These split E8 into a C8 group of 128 1/2 integer vertices and the 112 D8 integer vertices.

The first discovery several months ago:
In building the visualization for Fano planes, I noticed a pairing was required in order to algorithmically construct the Fano plane for each permutation of octonions. That pairing was aligned with the need to “flip” sequential pairs of numbers in one of the first three triads (the ones that create the flattened list). It also turns out that these pair into 15=7+8 pairs that correlate to the E8(240)=D8(112)+C8(128) groups of vertices.

The 7/8 (or D8/C8) split also provided the indicator on where to assign the “excluded” permutations (they get the 0 color and 0 generation assignment referenced above). It becomes trivial to apply a naive sequential assignment of 30 into two sets of 7/8 into the generation and color bits.

To reach the doubling of the 512=480+32 “excluded” octonion permutations, I added what I call a 9th “flip” bit parameter. This correlates well with A Zee’s approach to grand unification using a 9D SO(18) group theory. It turns out that the pattern required for flipping works in unison with the a and p bits in a binary logic relationship. As the demonstration clearly shows, the p bit flips the two sets of four sm bits. (Hint: this is the key to the eureka moment). Also note: Charge-Parity-Time (CPT) conservation law (symmetry) considerations also strongly link the a, p, and spin bits.

The binary logic relationship with the “flip” bit and the sm bits clearly create two 4 bit quaternion sets (anti+3 spin bit quaternion and a generation+color quaternion). While this double set of quaternions was already obvious to me from the E8 construction (noted in http://theoryofeverything.org/TOE/JGM/DynkinParticleReductions.cdf), it was good to confirm it with octonion integration! It seems that this pair of quaternions could be visualized as Hopf Fibrations on 7-manifolds (see http://www.nilesjohnson.net/seven-manifolds.html for an excellent review of this).

It correlates well with my previous post for the relating of time to octonions, charge to quaternions and 3-space to complex (imaginary) numbers. This idea also validates the dimensional considerations that started me down this path 15 years ago (documented in http://theoryofeverything.org/TOE/JGM/ToE.pdf).

Last night’s eureka moment:
Viewing the p bit as a kind of in/out (or z-x or yaw rotation), it becomes clear that the thing that differentiates electrons from neutrinos (pType) is a third intrinsic spin type. This rotation is well known in 6 degree of freedom (6DoF) models, but is typically ignored due to it not being “required” for 3D rotations.

What this implies is that both the charge and mass differences in these particles can be assigned to the third intrinsic spin (rotation) type. It should be deeply related to the long known Higgs SM mechanism and its recently discovered Higgs particle near my predicted mass of 124.443…GeV. It should also help resolve the Distler and Garibaldi argument with Lisi related to incorporating the 2nd and 3rd generation of fermions into E8.