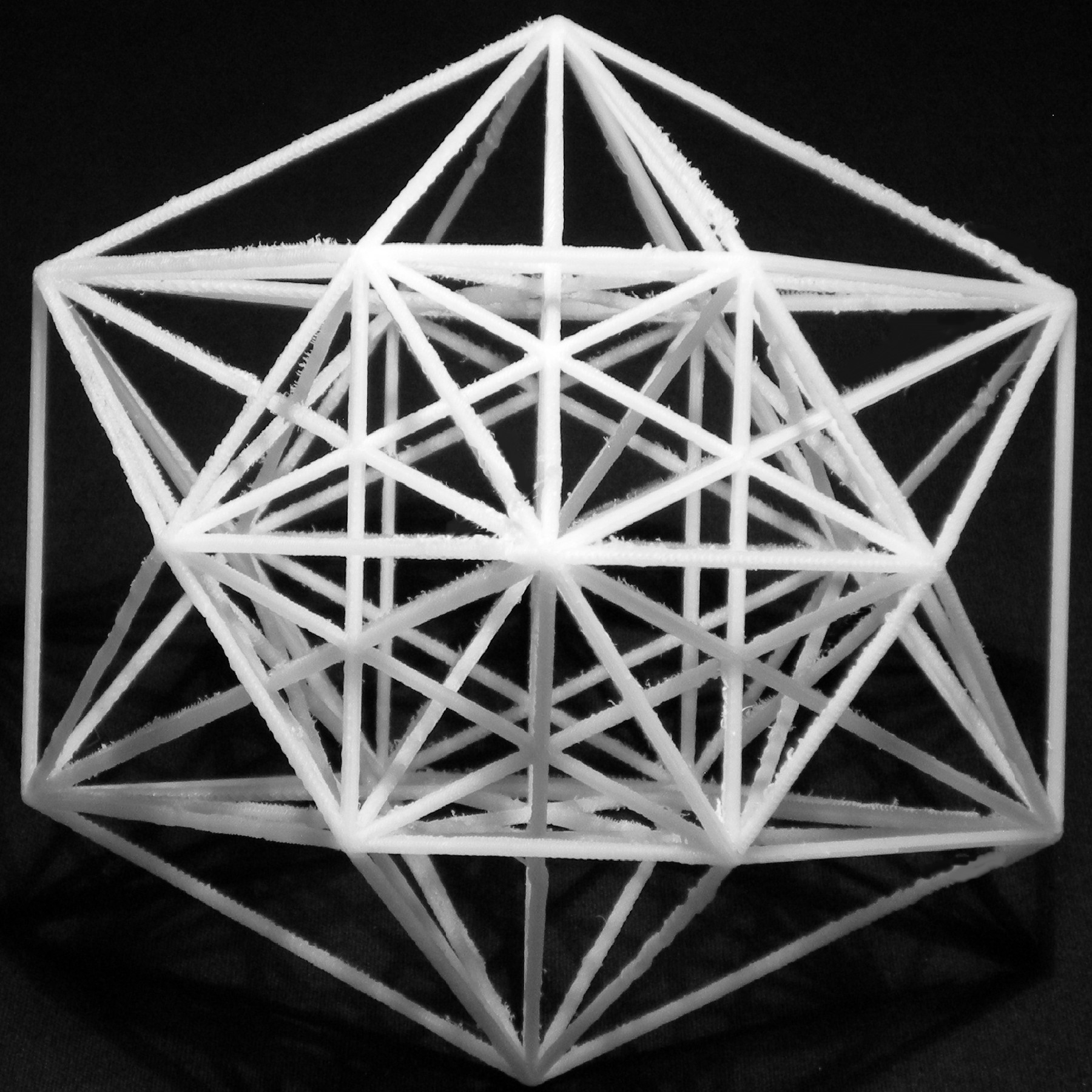 Just thought I would show some recent development in generating real objects from the E8 Mathematics.

I found a home to host my thousand prim objects that are generated directly from my Mathematica E8Flyer notebook. This is a shot of the gallery with a few 2D and 3D projections from the tool. Cool News. I developed the process to output the E8Flyer to Second Life. Looks like the POVRay output is working better too (see pic)

It is the smaller white one next to the very nice larger (and better) green projection that Wizzy Gynoid, Desdemona Enfield, and Garrett Lisi created.

Some recent symmetries from the E8Flyer.

Some recent 3D pics based on Golden Ratio’s.

I thought it would be fun to start posting pictures generated from the E8Flyer.  If you have used it and discovered any symmetries for yourself – please post them here.

I am working on generating even more beautiful pictures based on E8 using POVray.  We’ll see how that goes, I might even get POVray anaglyphs out of it!

This is a pic I uploaded to wikipedia a few weeks ago.

The pic below is a generated from my latest E8Flyer.nbp – it has all 28,680 edges (with the particles at the vertices scaled down in order to focus on the edges).

As most very inquisitive young boys, I began pondering religious, philosophical, and scientific aspects of “the universe”. I still remember what might be called “an awakening”, an early evening walk home from a friend’s house where I stopped to stare at the stars to wonder about our origins. This, along with my father’s physics education and engineering career, motivated me to the study of physics in college. I obtained a bachelor of science in Electrical Engineering in 1982.

The lure of comfortable paychecks and distaste for what I perceived to be an overly bureaucratic and self-serving academic process led me to start my career in 1983. While I was happy with that choice, I never forgot my boyhood dreams of understanding the universe.

While attending a time management session in the late ‘80s, we were asked to document a “life goal”. The process included generating a plan to achieve this goal, complete with initial tasks and allocation of time, etc.  Well, needless to say, my goal was to complete that boyhood dream.  The deadline for this plan was not fixed, but I thought it would be great to complete it before I turned 40.  I knew this was going to require that I go back to school in order to learn and collaborate with those in the theoretical nuclear astrophysics community. So what to do, given my career ?

The initial plan called for generating enough income to be able to quit work and attend graduate school. The attempt to parlay my career talents as a consultant and troubleshooter into that income failed due to the fact that it didn’t generate the desired income and I didn’t really have the stomach for “business”. My passion was physics.

Now by the mid ‘90s, I had determined that I would just have to do it by using the hours between 6PM and 3AM to read, study, theorize, analyze, calculate and document a view of the universe that might integrate the Standard Model, quantum mechanics and general relativity. So with support from my wife and son, without the support of academia, my adventure began with work on what some would begin to call a “theory of everything (ToE)”.  I pulled on a few threads of insight and found patterns relating the fundamental universal constants which by research had yet to be realized.

Of course, the devil’s in the details and all adventures have ups and downs. A few early attempts to collaborate were understandably rejected by academia and confused by those outside academia on Bulletin Board systems (BBSs) and the Internet. Yet, it was exciting to begin to possibly understand some of these fundamental workings of universe as I realized that my theory could have “predicted” the discovery of an accelerating universe in 1998.

Many more intriguing predictions and intuitive relationships have emerged from these original threads, which I hope might be potential foundations for a ToE. I realized I needed get my papers up to academic standards, so  I now use LaTex/RevTex APS publishing format for my work and Mathematica™ for rigorous analysis of the theory. Since 2001, I have published it on this website established for that purpose.  Yet as expected, this has not resulted in any interest from academia. Of course I totally understand that even IF the ideas are “not wrong”, that they are too far reaching and risky for those in academia (who are already consumed in their own work) to take time to consider without some bit of influence.

I receive regular email requests for review of what is for the most part “crackpot” work from those outside academia. I fully realize the probability of being dismissed as such, but I do, for the most part, attempt to follow the golden rule and review understandable works – even though I have yet to find any to which I can respond favorably.
—————-

This brings me to the point where I dare ask; if you are associated with academia and are both willing and able, would you read and critique my work?

ToE.pdf is the full paper. The paper is concise in that it consists of one page of introduction, four pages establishing the theoretical model, and eleven pages of implications and “somewhat risky” conjectures. A ten page appendix of complete particle prediction tables can for the most part be ignored as they are a “work in process”. ToEnb.pdf is also provided for convenience with computation and analysis. It is the same paper, but with Mathematica™ 6 source/output before each equation and/or conjecture.

Please accept my thanks in advance for any review! I won’t call it “peer review”, since it would be overly presumptous to associate myself as a peer to an academician.

BTW – I have already missed my first deadline as I am 48, so my current deadline for completion is two years away at 50.  A stretch goal would be to publish my prediction for the Higgs mass (148 GeV)  before the Large Hadron Collider (LHC) discovers it soon after it is fired up next year.