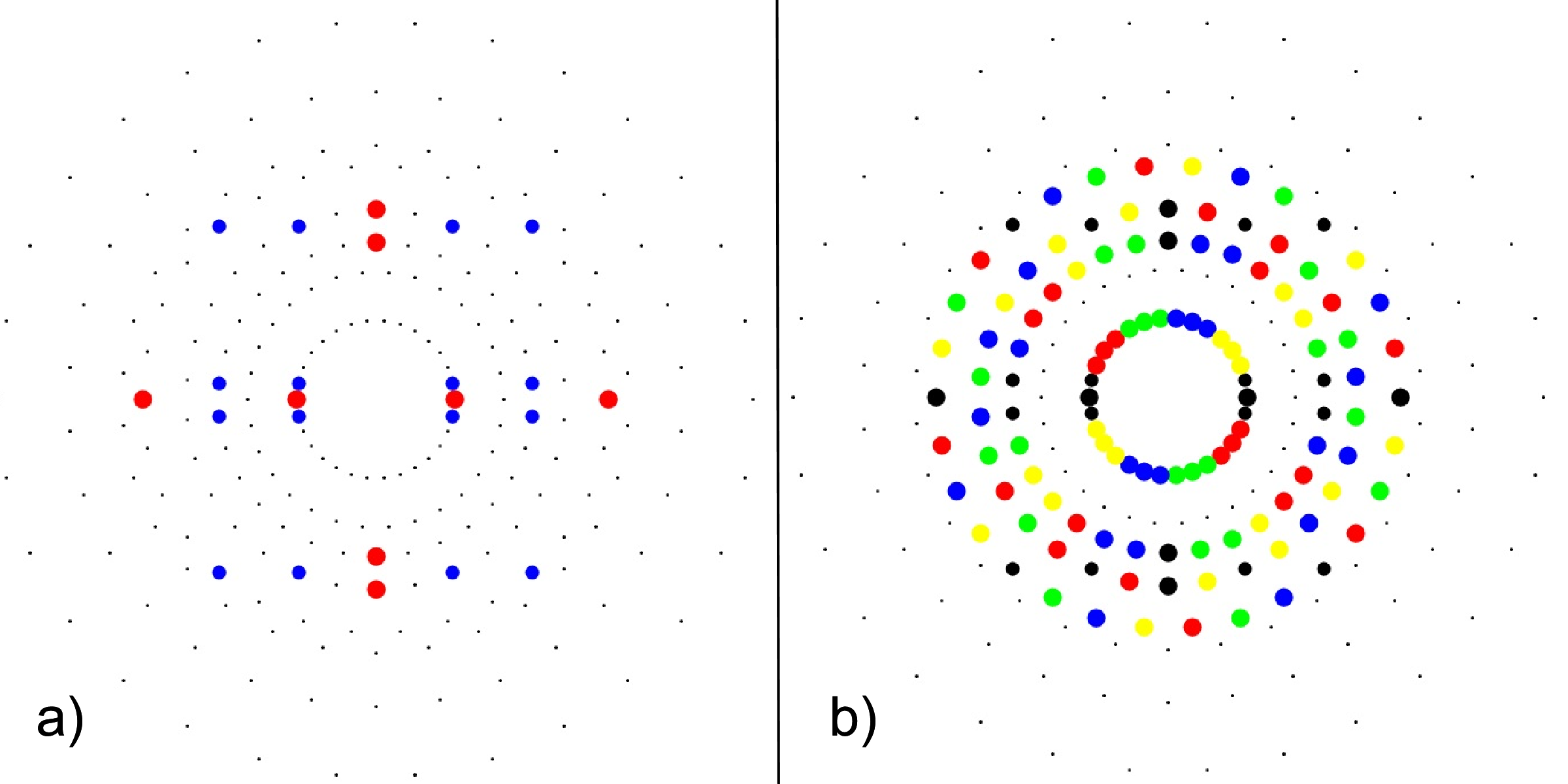 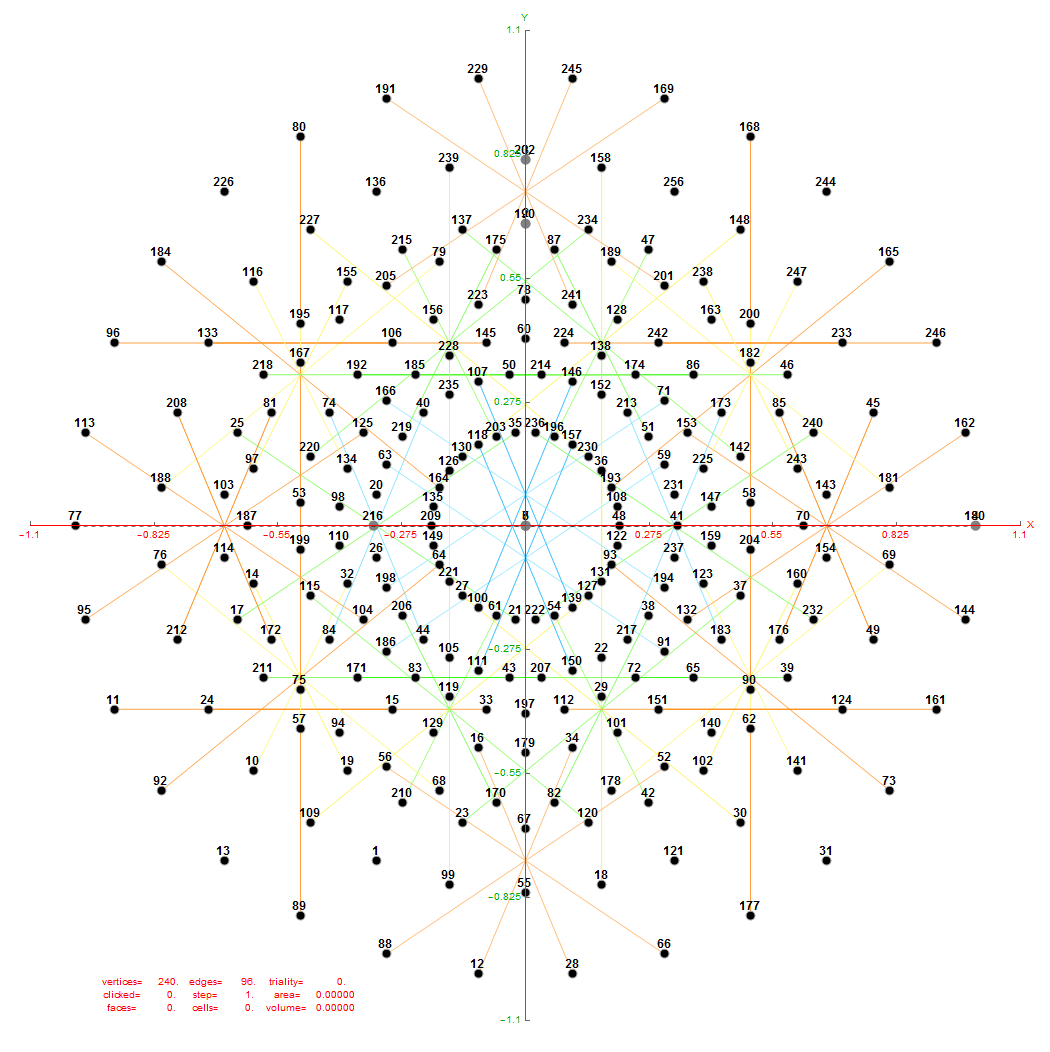 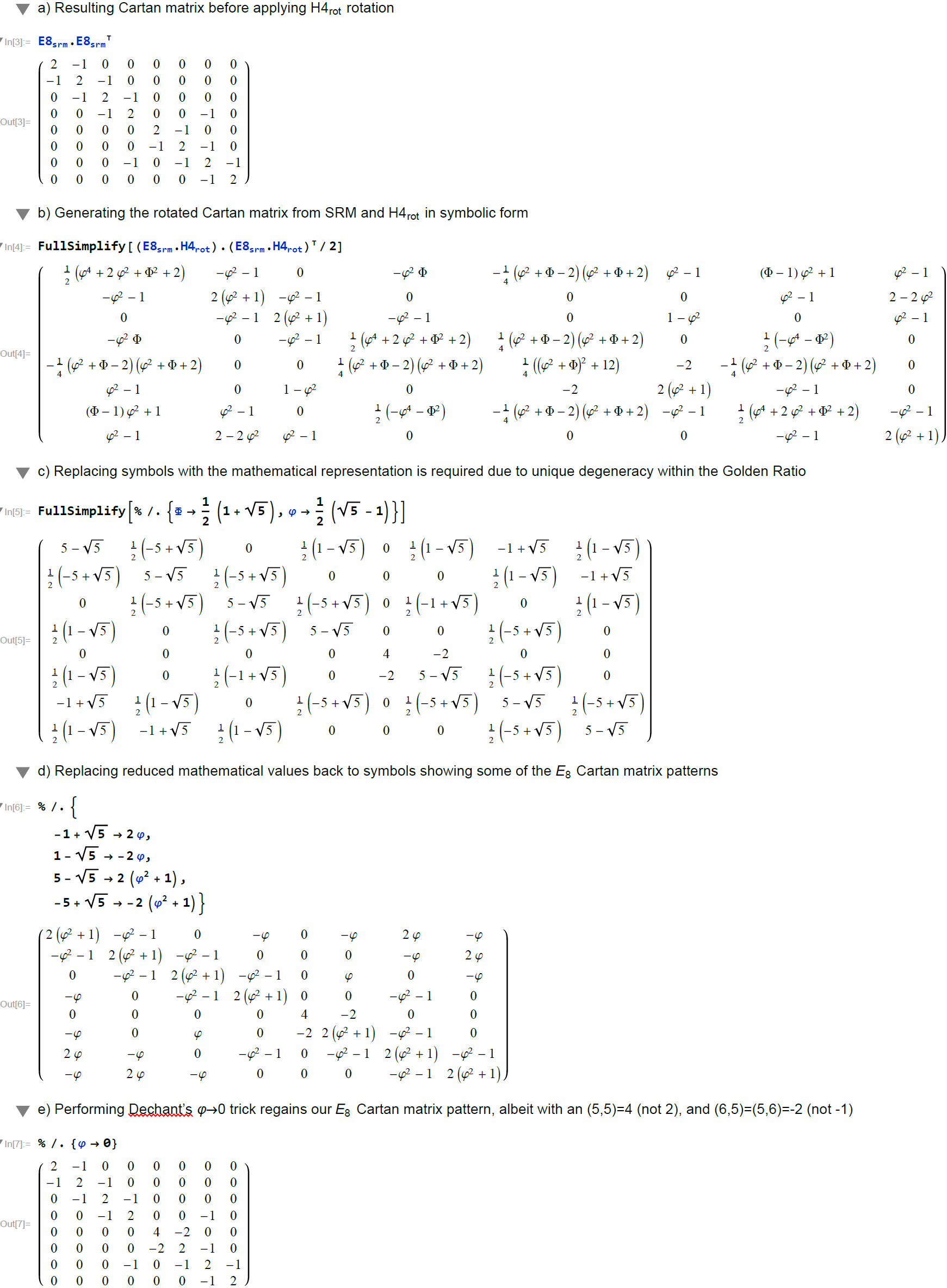 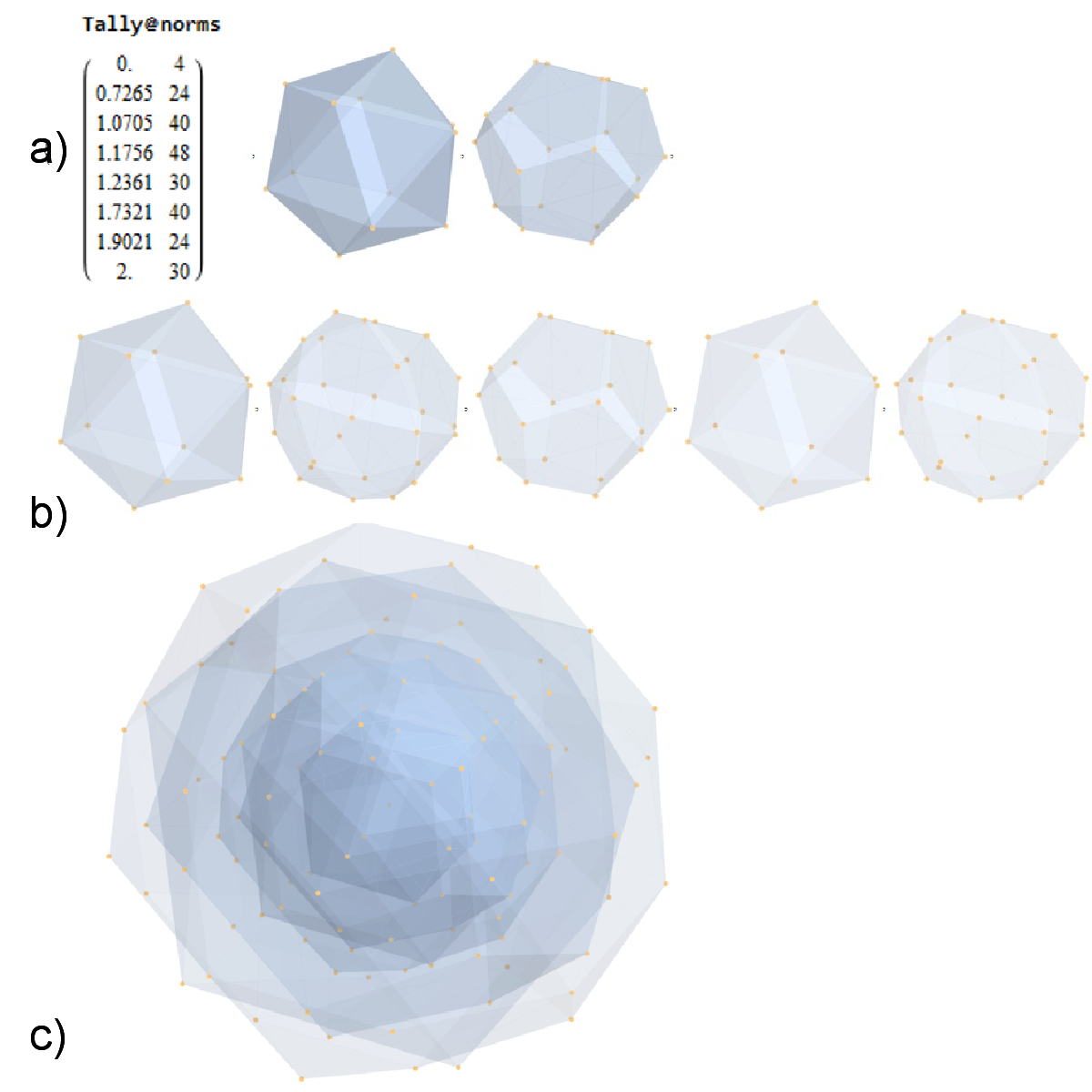 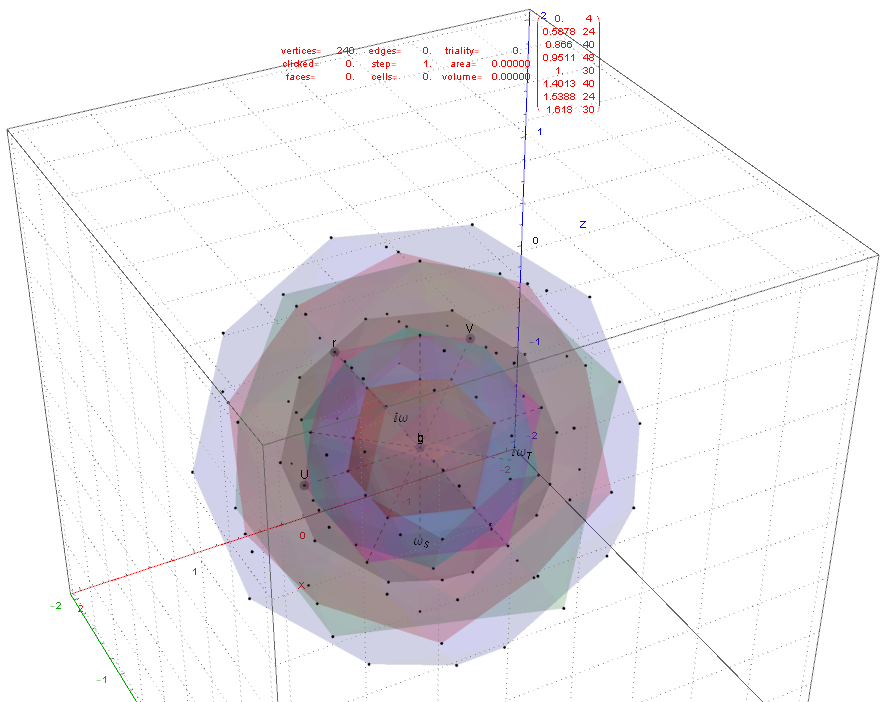 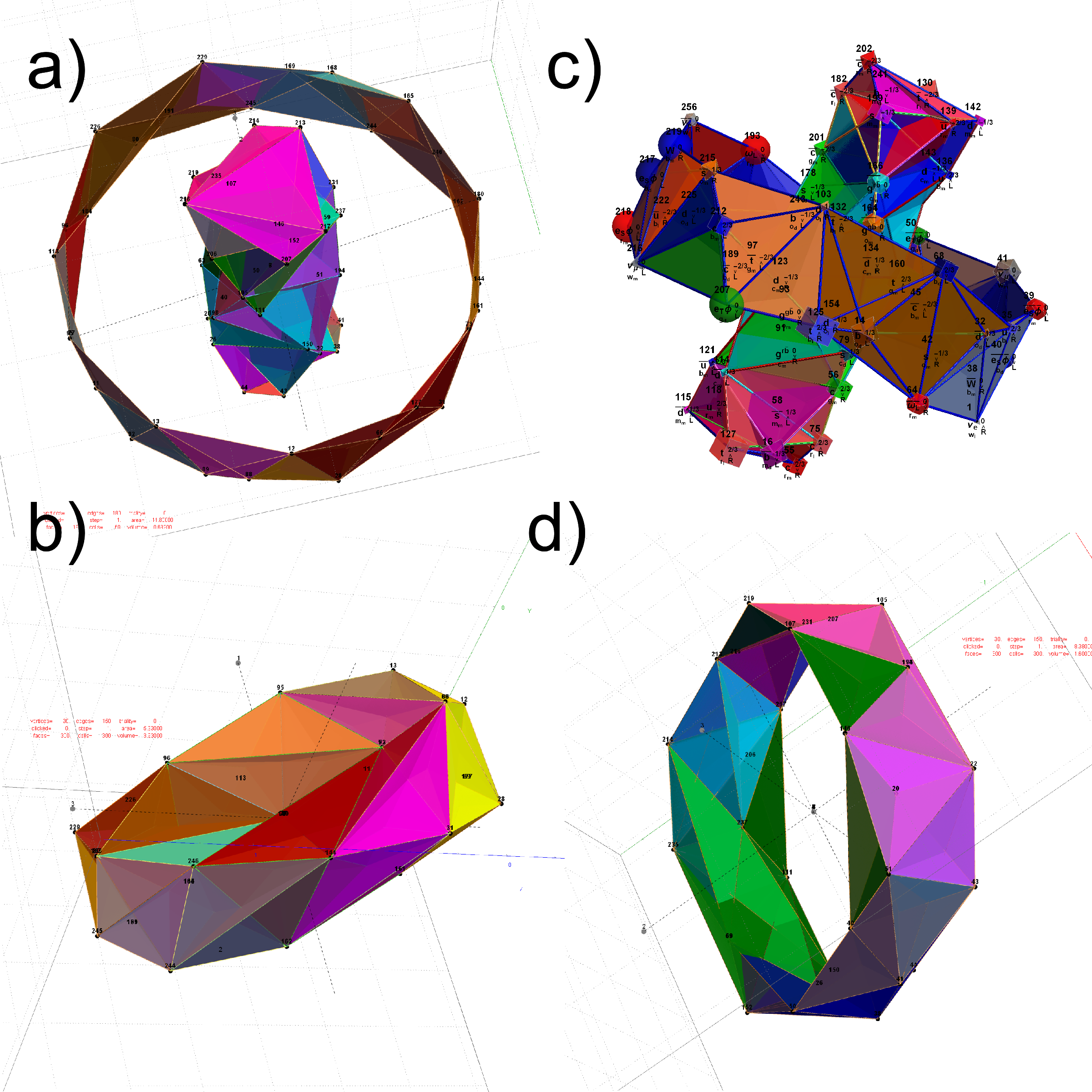 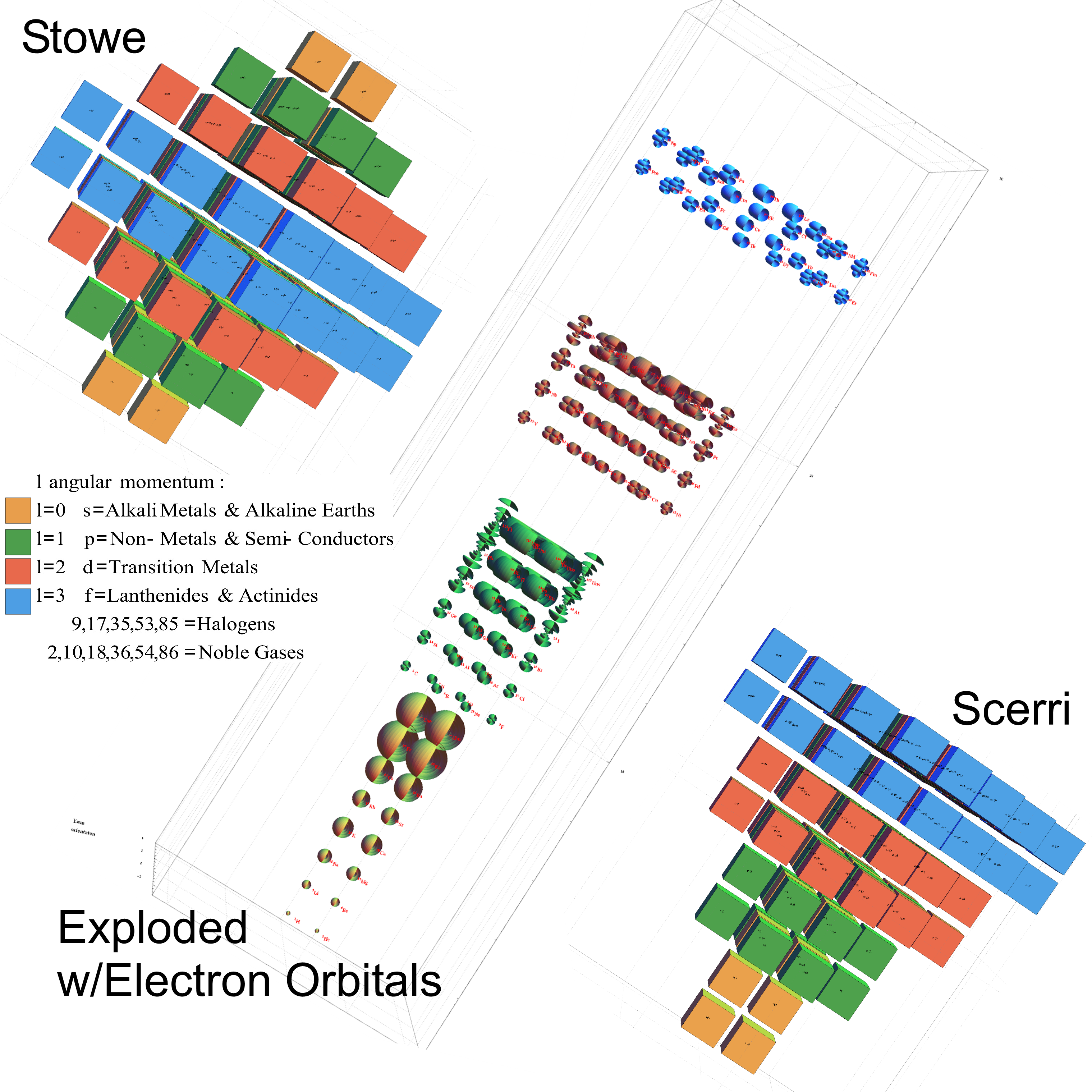 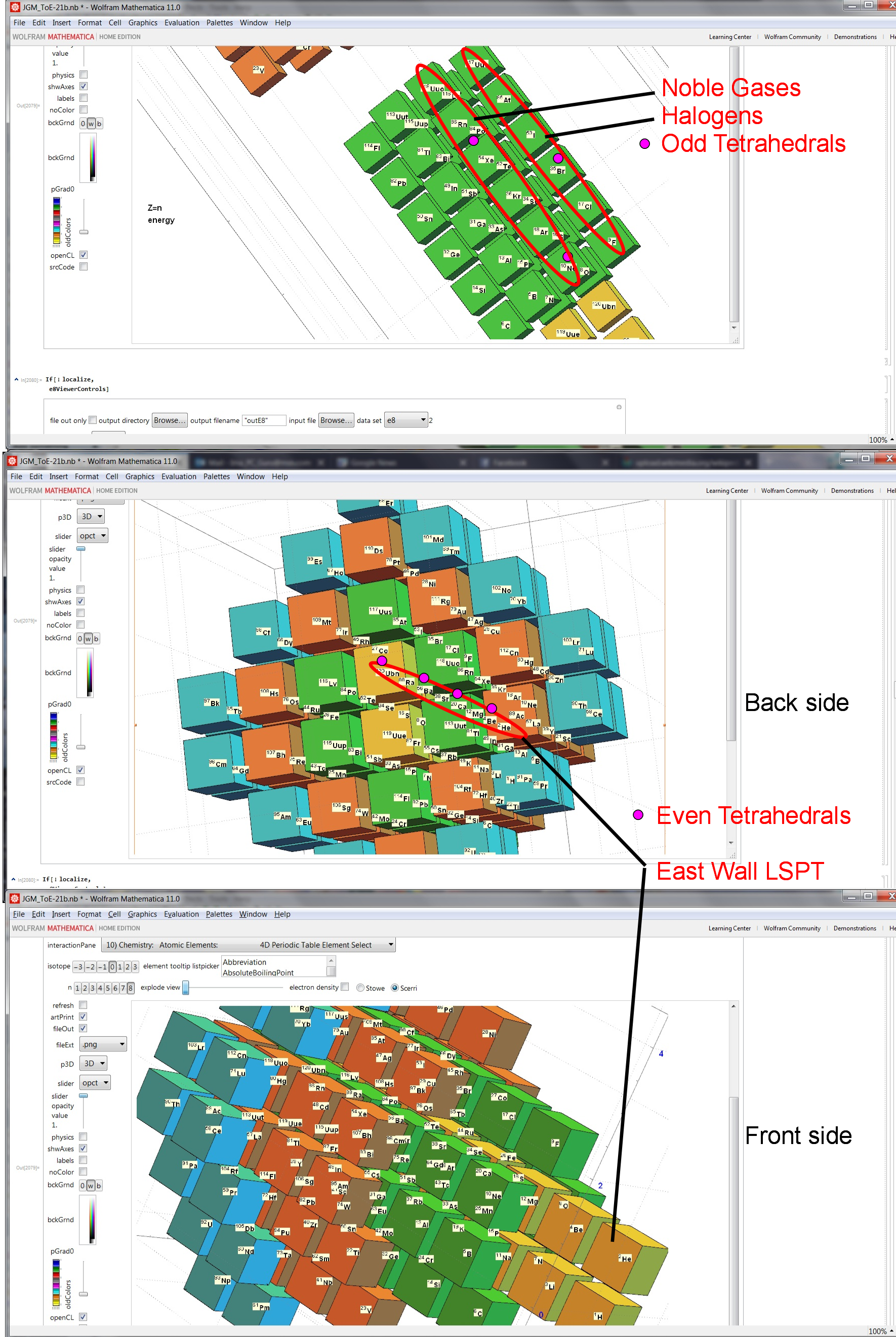 I have been intrigued with Richter’s arXiv 0704.3091 “Triacontagonal Coordinates for the E8 root system” paper.

Please note, the vertex numbers are reordered from Richter’s paper in order to be consistent with ArXiv quant-ph 1502.04350 “Parity Proofs of Kochen-Specker theorem based on the Lie Algebra E8” by Aravind and Waegell. This paper uses the beautiful symmetries of E8 as a basis for proof sets related to the Bell inequalities of quantum mechanics. Below is a graphic showing that vertex number ordering: 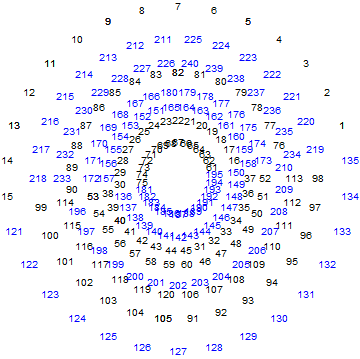 The above unity length edge pattern has is more consistent with the SRE E8 below. 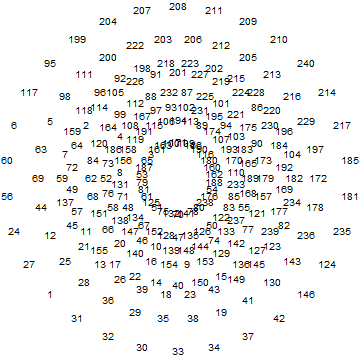 Here we take the 4D-left half and project to two concentric rings of H4 and H4 Phi (Golden Ratio) with 56 nearest edges per vertex (Norm’d length of unity or Phi for each vertex):

The animation frames are sorted by the ArcTan[y/x] of the vertex position in each ring (sorted H4*Phi outer to inner, then H4 outer to inner). 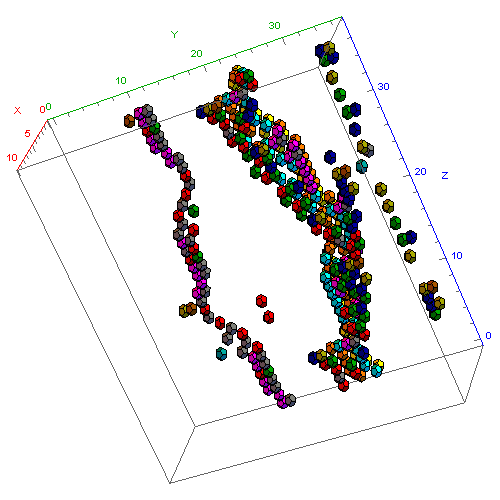 Animations of Wolfram’s Cellular Automaton rule 224 in a 3D version of Conway’s Game of Life.

While this does not yet incorporate the E8 folding to 4D H4+H4φ construct, the notion of applying it, as the title suggests, to a fundamental particle physics simulation of a “Quantum Computational Universe” or an emergent (non)crystallographic genetic DNA (aka. Life) is an interesting thought… 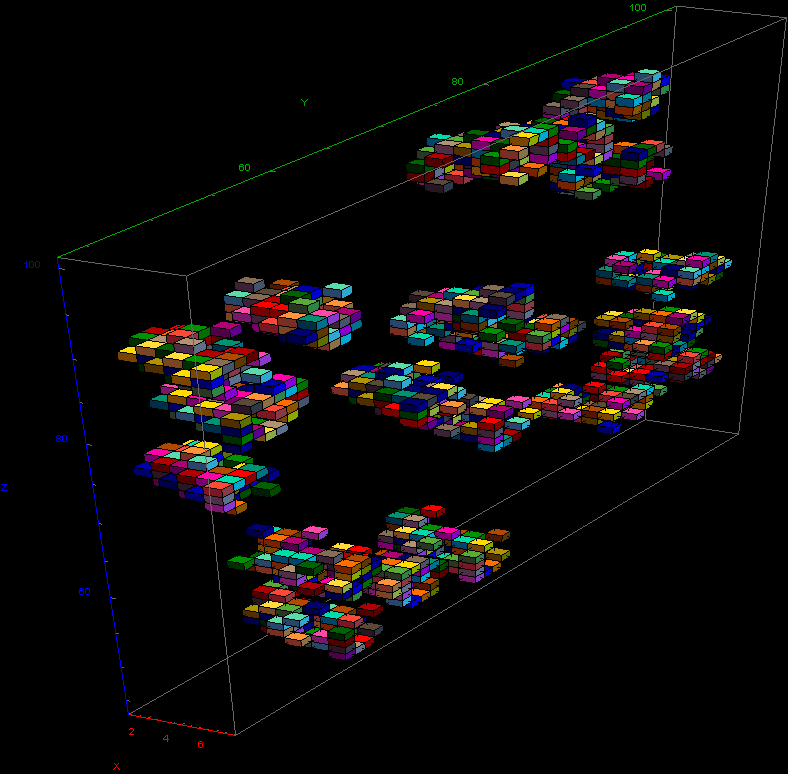 These are snapshots of all the different initial conditions on the rule 224. Each set of 25 has a different object style and/or color gradient selection.

I’ve got interaction between the DNA/RNA protein visualizations (e.g. “1F8V- PARIACOTO VIRUS REVEALS A DODECAHEDRAL CAGE OF DUPLEX RNA) with the VisibLie_E8 projections of crystallographic E8 to non-crystallographic H4 (and to dodecahedral H3 in 3 dimensions, of course).

These pics are a simple (naive) merge of the D6 projected using the E8 to H4 folding matrix and the Protein DB at http://www.rcsb.org/ for 1F8V). 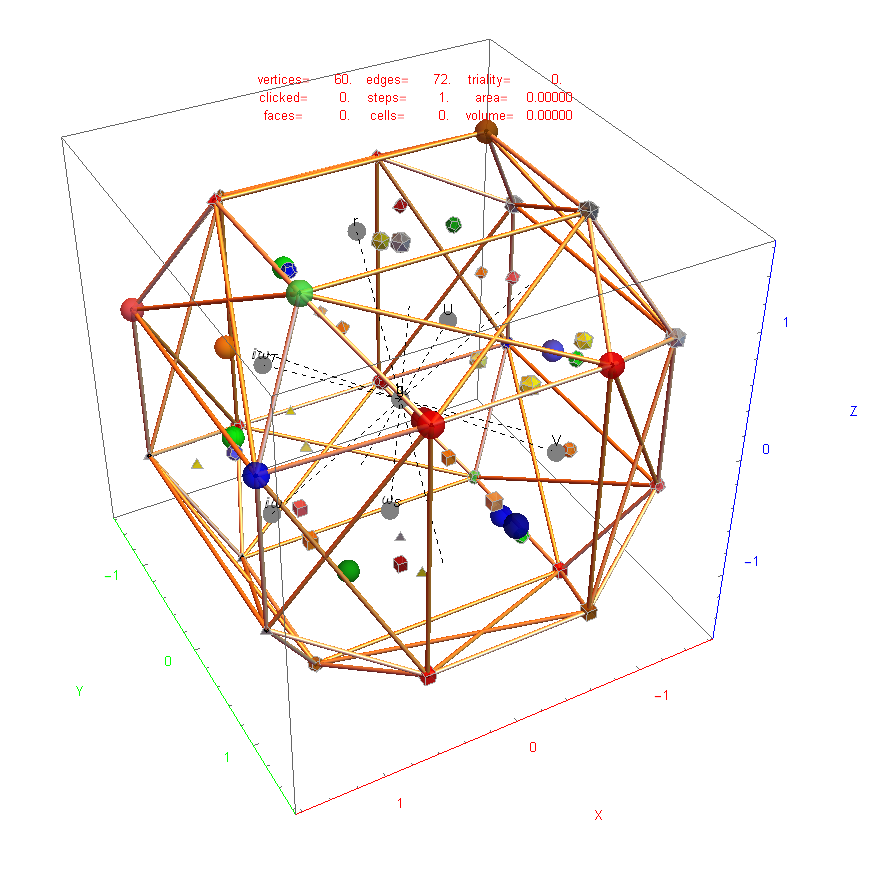 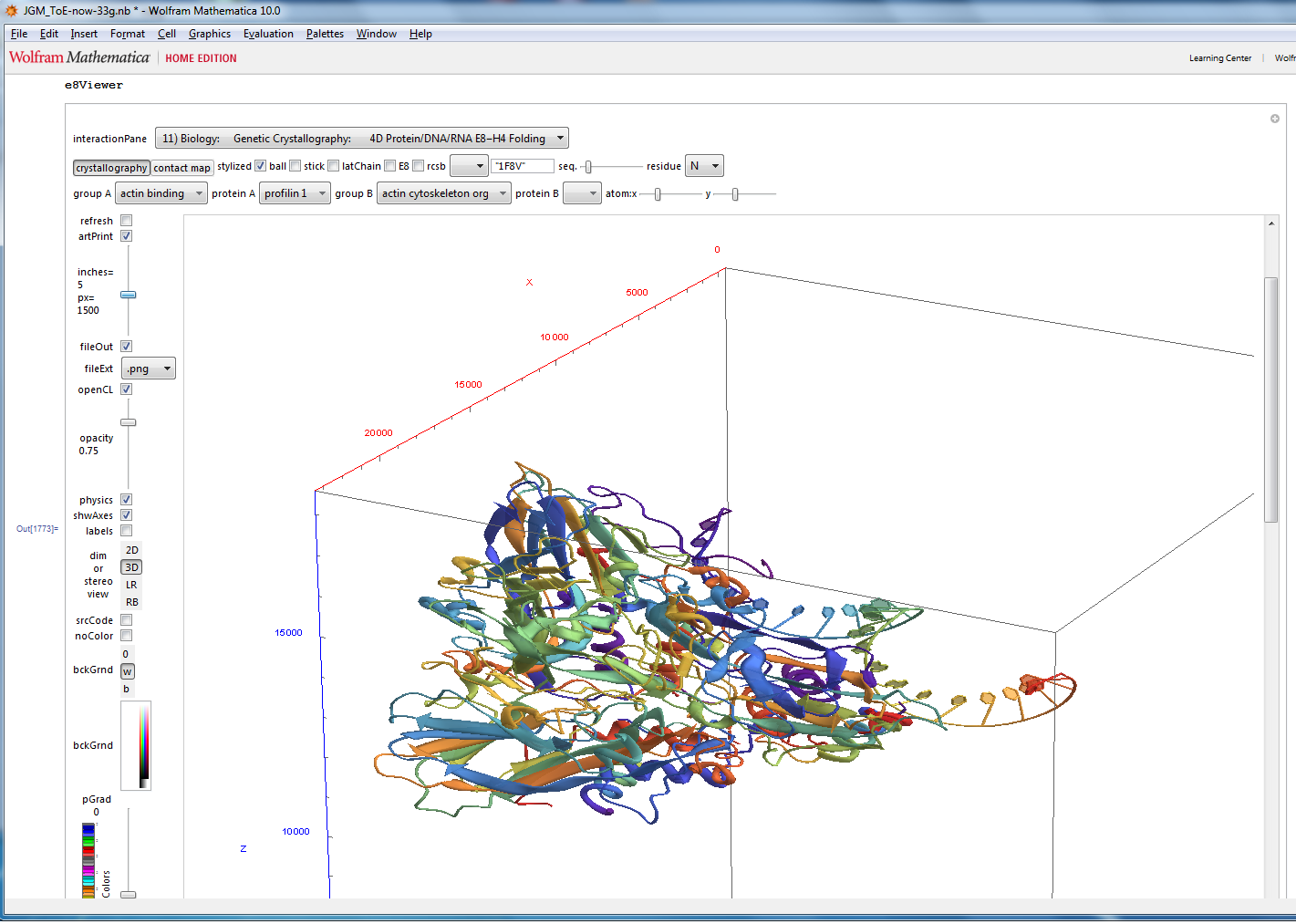 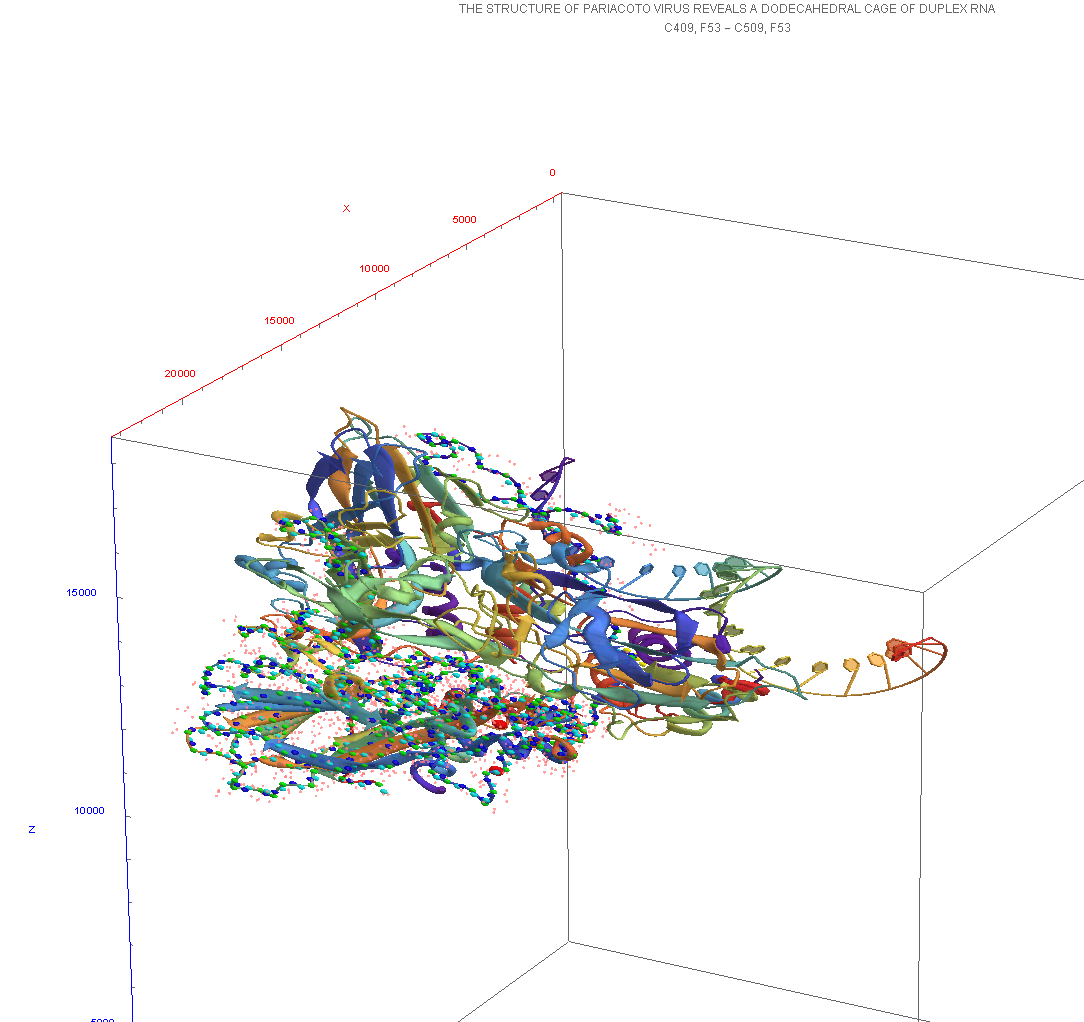 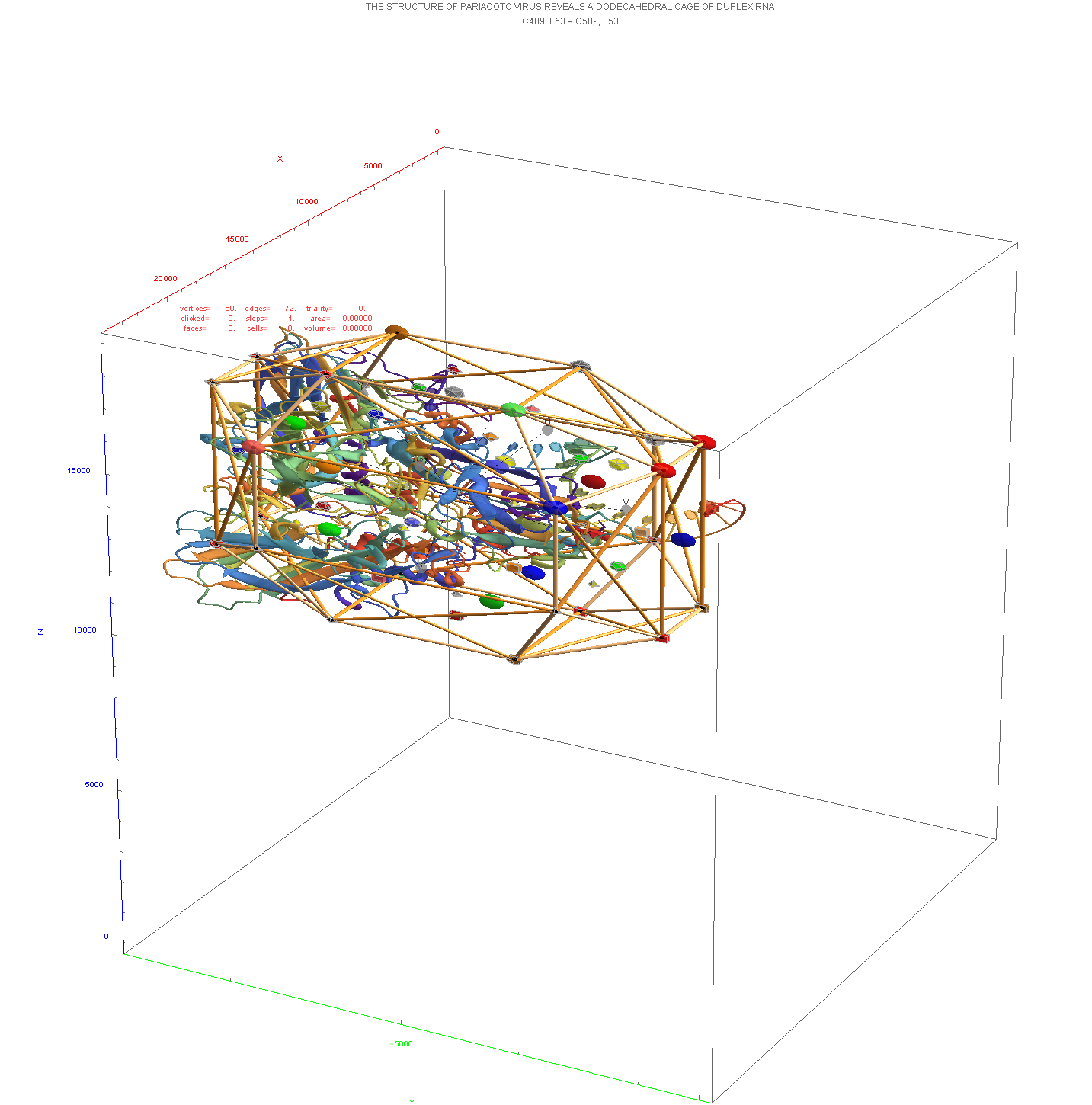 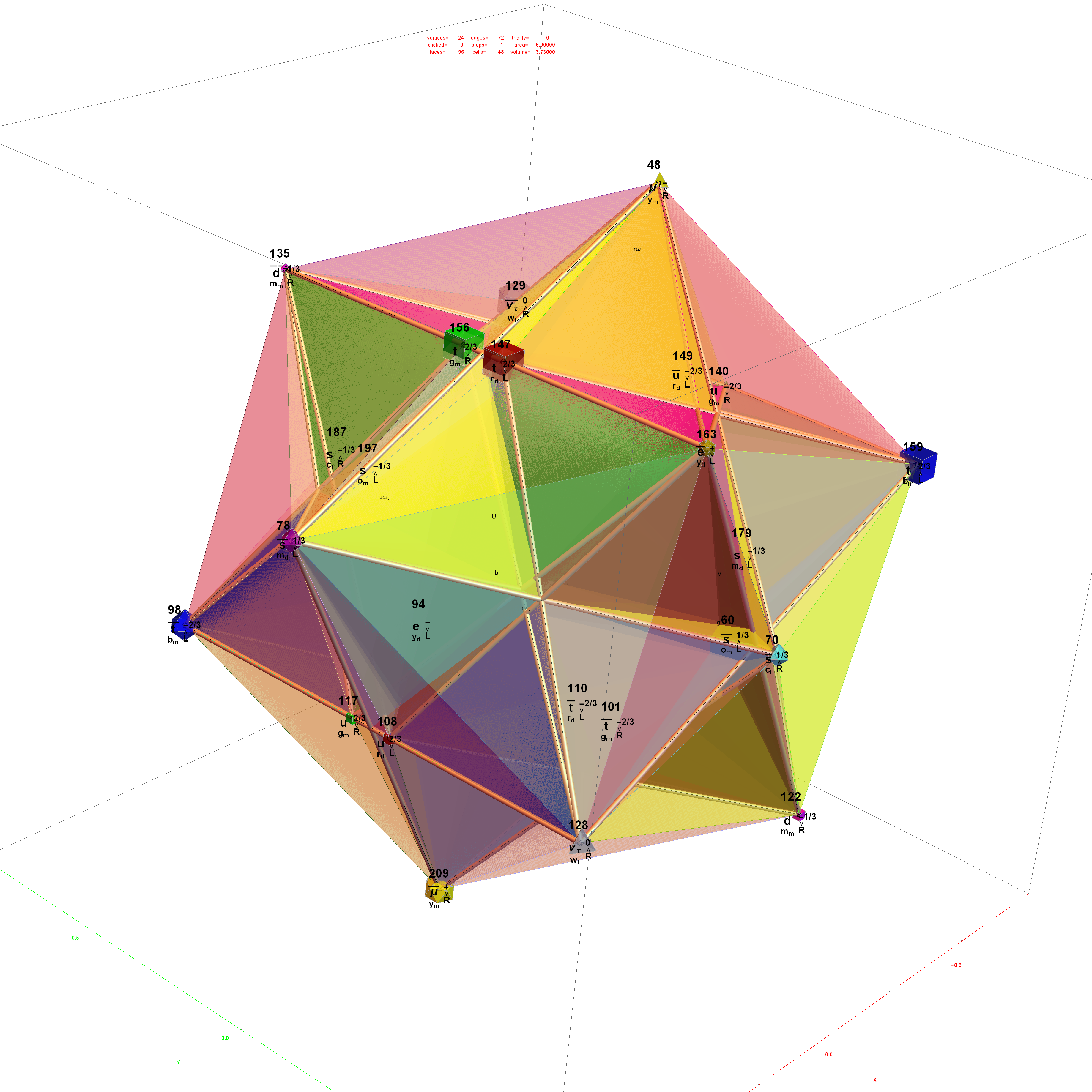 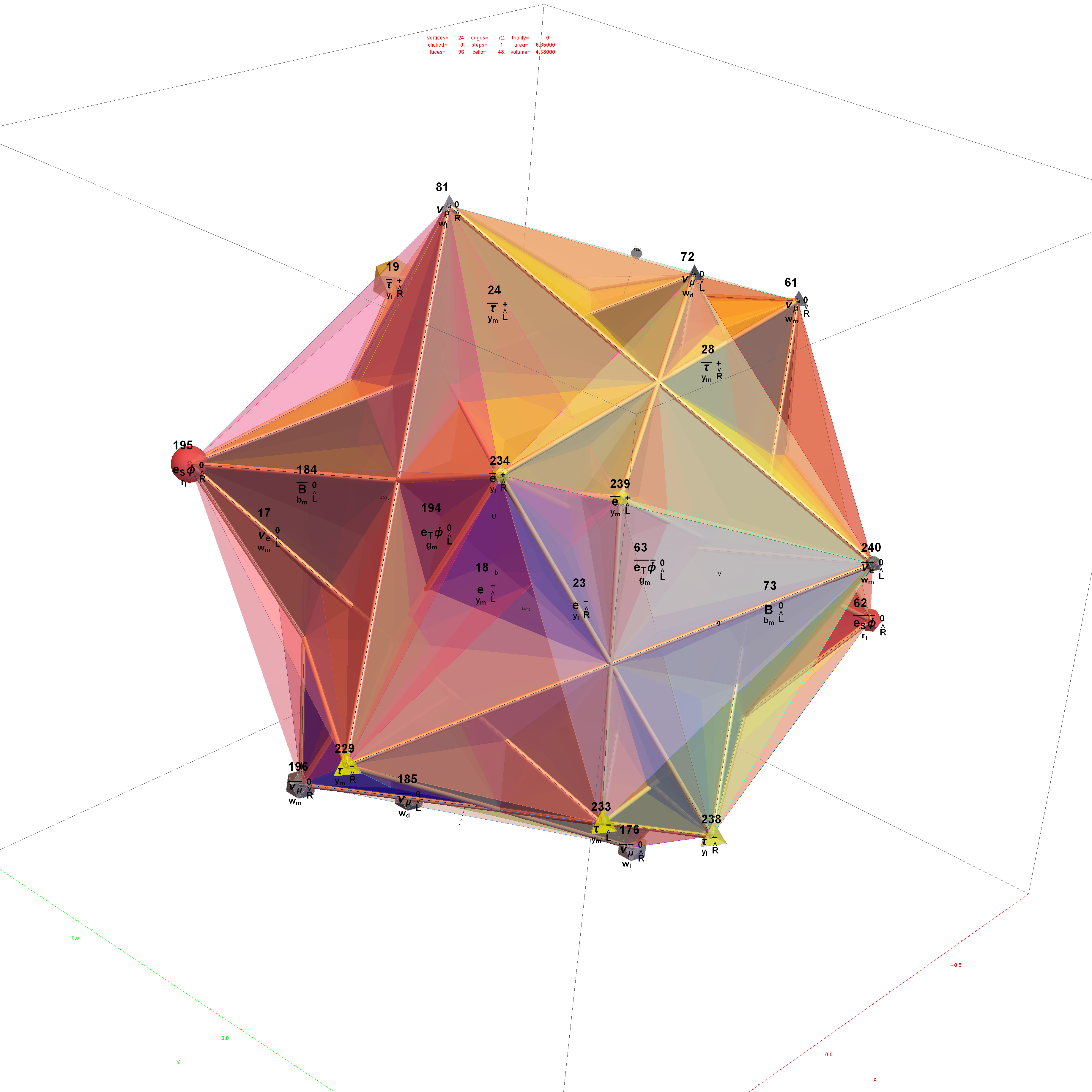 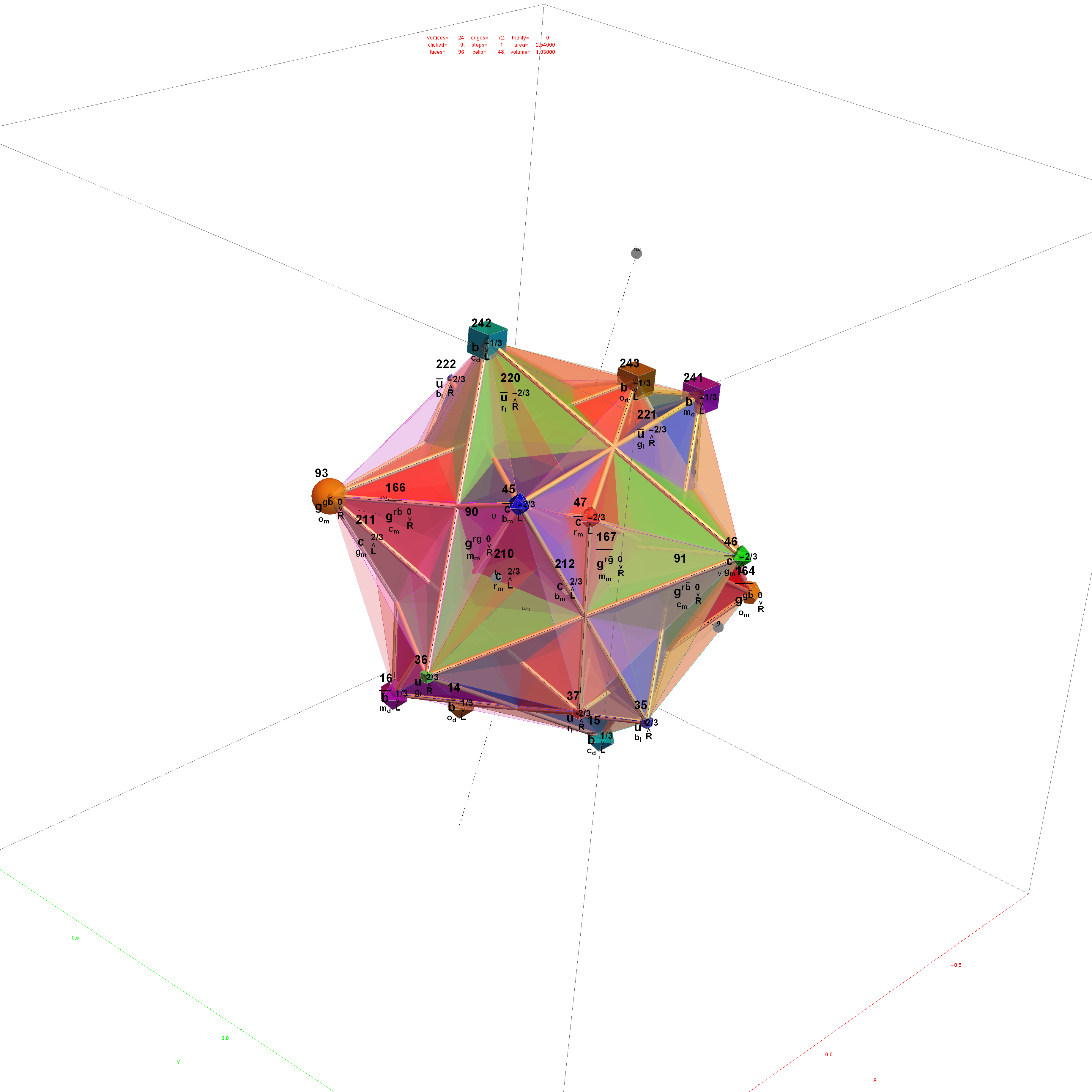 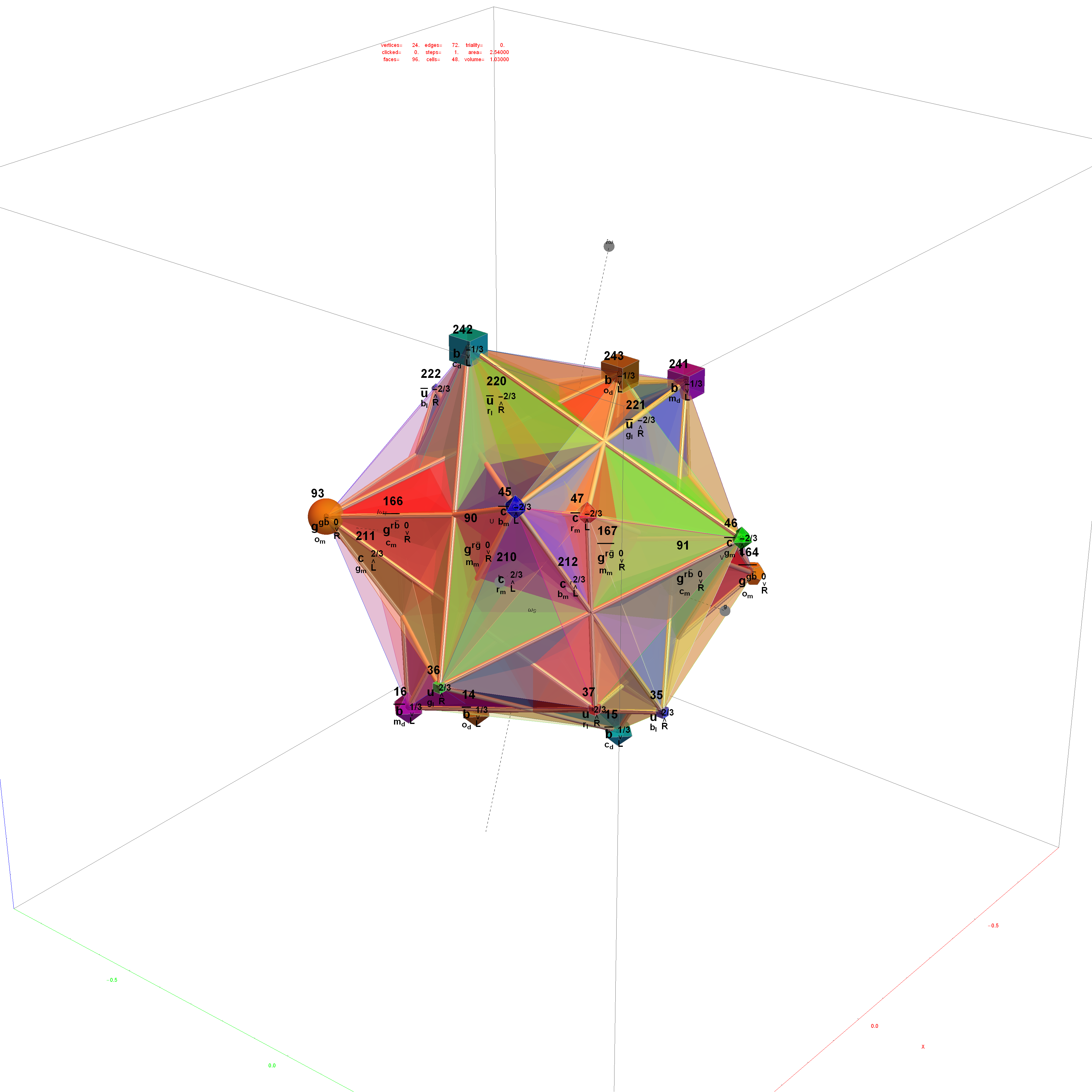 This blogs.ams.org/visualinsight article is an American Mathematical Society post based on some of my work. I’ve made an animation of the D6 polytope with 60 vertices and 480 edges of 6D length Sqrt(2). It is similar to the one in the article by Greg Egan. This version was made from my VisibLie E8 demonstration software.

The process for making this using the .nb version of VisibLie E8 ToE demonstration:
1) Side menu selections:

2b) Inside the pane selections:

3) Go to the #2) Dynkin pane and interactively create (or select from the drop down menu) the D6 diagram.
BTW – this actually selects the subset of vertices from the E8 polytope that are in D6.

or simply upload this file or copy / paste the following into a file with extension of “.m” and select it from the “input file” button on the #9 HMI nD Human Interface pane.

In the next version I will just make this another “MetaFavorite”, so it will be in the dropdown menu in all versions.
Enjoy! 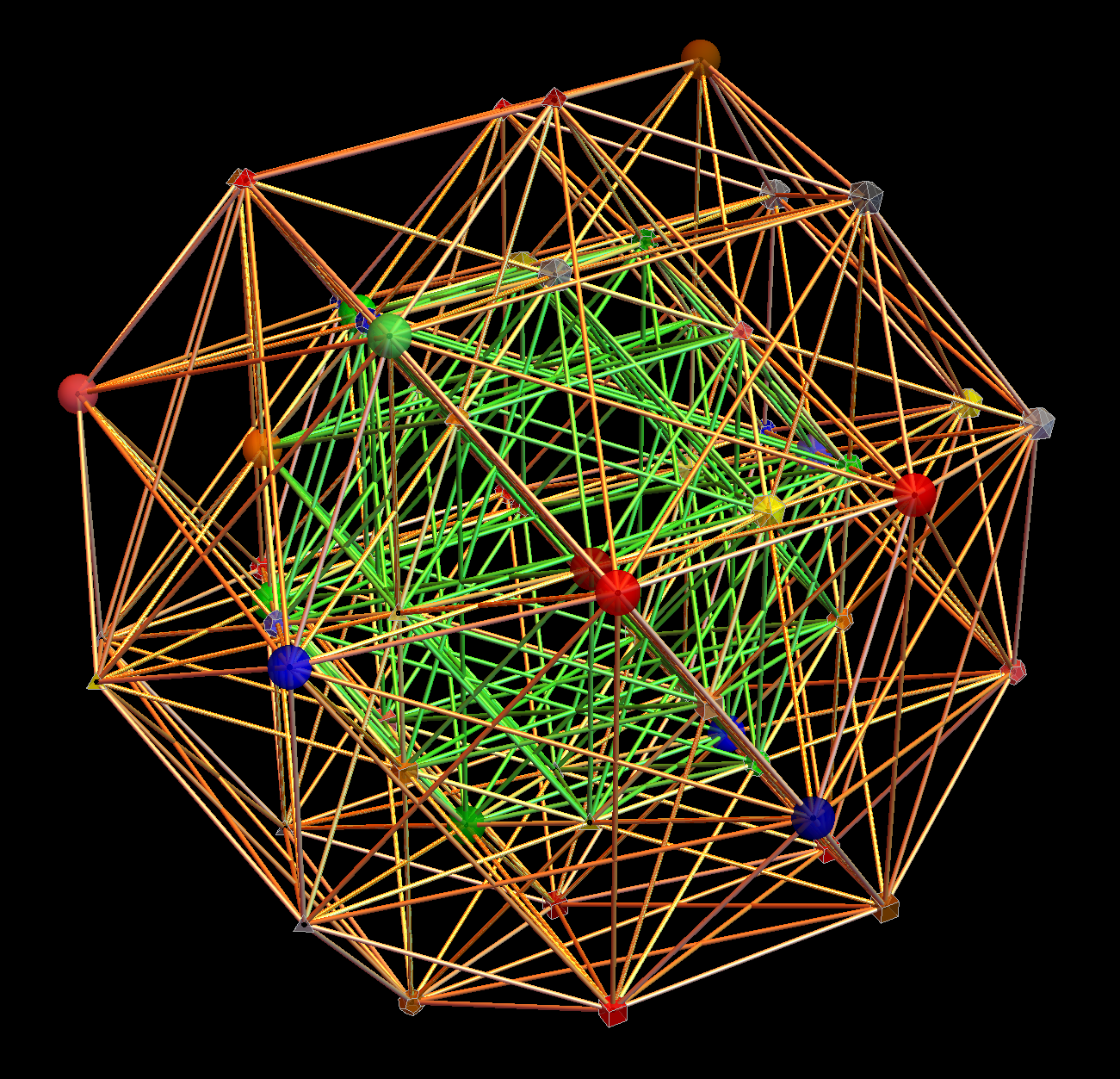 This blogs.ams.org/visualinsight article is an American Mathematical Society post based on some of my work.

This animated Gif from the article is from Greg Egan